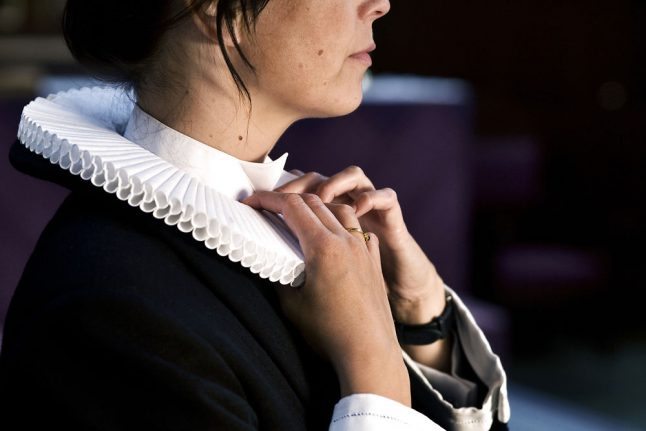 The survey came after a previous report that Jakobskolen, a Christian private school in Aarhus, cancelled its participation in a Christmas service at a local care home because the service was to be conducted by a female priest.

In the Jyllands-Posten survey, 158 of 631 female priests responded that they have felt discriminated against by a male colleague based on their gender.

Else Marie Wiberg Pedersen, a theology professor at Aarhus University, said that Denmark should reconsider whether it should be illegal to discriminate against female priests.

“The (survey) could provide an opportunity to have a serious discussion of whether we should continue to accept [a range of religious interpretations, ed.] if female priests still feel discriminated as a result of that acceptance,” Pedersen told Jyllands-Posten.

Minister for the Church Mette Bock rejected such suggestions.

“I don’t think this is about control or rules, but about having an open discussion. That is what helps to move things forward,” Bock said to the newspaper.

The Danish Society of Priests (Præsteforeningen) also said that it did not believe that narrowing the range of acceptable views amongst clerics was the way forward.

The organisation’s chairman Per Bucholdt Andreasson told Jyllands-Posten that it was not possible to control people’s thoughts and opinions.

A second part of the newspaper’s survey found that 11 percent of female priests had, at some point, been refused a handshake by a male colleague.

One instance in which that can occur is when priests are ordained, the newspaper writes.

Female priests have regularly been a topic of debate in Denmark. The first woman priests were ordained in 1948, while Viborg became in 2007 the last parish to demand that male priests should shake hands with all other priests at ordination, regardless of gender.

Following the Jakobskolen’s decision to back out of an event led by a female priest, local dean Esben Thusgård wrote in a complaint to the school that the issue was, for him, something that “can be characterised as one thing and one thing alone: simple discrimination”.

The headmaster of the school involved in the controversy, Kaj Markussen, earlier told Jyllands-Posten that he had taken the decision not due to school policy, but to recognise the views of around 10 parents who do not want their children to attend services given by female priests. Conservative Lutheran Danish organisations such as the Inner Mission (Indre Mission) continue to hold such views based on their interpretations of the Bible.

Markussen has apologised for the situation and recognised that his school has found itself in a “mess”, the newspaper reported.

“If I could do it all again, I wouldn’t cancel the event,” he said.

“I don’t think we sympathise with the view (against allowing women to be priests), but we are choosing to show acceptance for the fact that view also exists. We want to make space for parents that have that view,” he said.

In 2017, a majority of politicians in the Danish parliament voted in favour of new rules increasing inspection and demands on private schools [Danish: friskoler, ed.] after Islamic schools of this type were criticised for failing to adhere to democratic values.