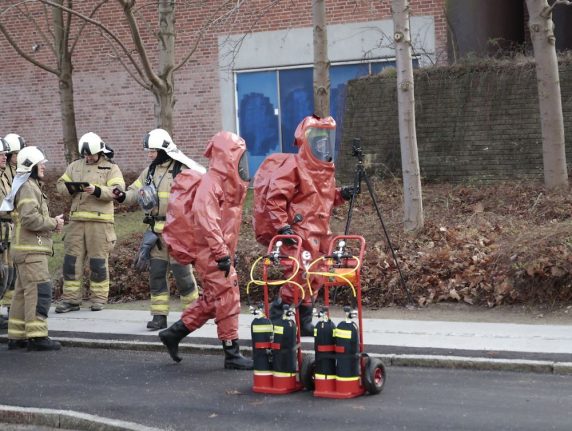 Eleven children and adults were subsequently taken to hospital as a precautionary measure after being exposed to the leaked chemical, emergency services in the area (Region Hovedstadens Akutberedskab) confirmed.

A temporary closure of the area close to the sports centre was ended later on Thursday afternoon.

“Most of the 11 people are children. The patients were transported from the location by ambulance. Fortunately, they are not showing any serious symptoms,” the emergency services said in a statement.

Eight or nine children are thought to have been affected.

Several other children and adults underwent checks after the incident at the Avedøre Idrætscenter swimming pool, where a chlorine leak was reported to police at 12:11pm on Tuesday.

“All signs point to an accident at this time. Health authorities recommend anyone who was at the swimming pool today and feels unwell to contact [medical helpline] 1813,” police wrote in a tweet.

Measures have also been taken by Hovedstadens Akutberedskab to stop the leakage at the pool.

“There is a chlorine leakage inside the building. That means we are carrying out an operation to limit and close (this). The building is, of course, closed to visitors,” operation leader Kristian Næsted told TV2.

A press spokesperson at regional health authority Region Hovedstad said people who visited the swimming pool earlier today should seek medical advice via the 1813 number if they were experiencing soreness or itching in the eyes or throat.

Chest pains or breathing difficulties were signs of potentially more serious symptoms and should be responded to by calling emergency services on 112, the health authority said.

But it was not necessary to seek medical advice in the absence of symptoms for those who had been at the pool earlier on Thursday, the Danish Patient Safety Authority wrote on Twitter.