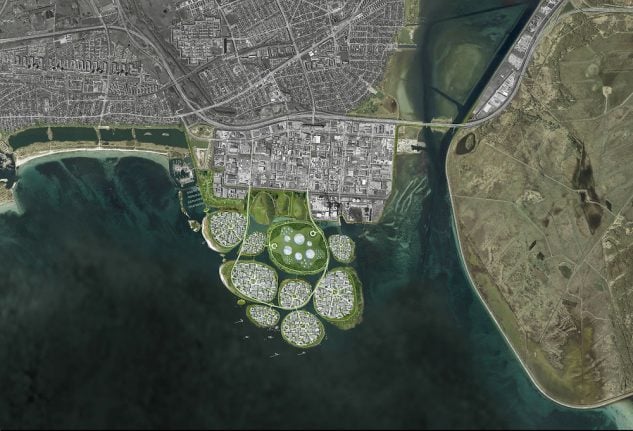 An illustration shows the proposed construction of nine islands at Avedøre Holme. Photo: Ministry of Economic and Business Affairs/Handout via REUTERS/Ritzau Scanpix

The government and Hvidovre Municipality announced the plan, which will see an extension of the Avedøre Holme area south of the Danish capital, creating nine new islands to be given the collective name Holmene.

The primary purpose of the new islands will be to create industrial opportunity.

“We're targetting high-tech companies but there's always a need for the production of products we use in our daily lives too,” Industry and Business Minister Rasmus Jarlov told Ritzau.

Minister for Employment Troels Lund Poulsen called the project “visionary” and said it had the whole-hearted backing of the government.

“This will help to even better connect Copenhagen with the regions to its west and to the rest of Zealand. Copenhagen and the surrounding municipalities are an important driver of growth for the whole of Denmark,” Poulsen said to Ritzau.

Construction on the nine islands is scheduled to begin in 2022, covering an area of three million square metres and adding 17 kilometres to Denmark’s coastline.

An illustration shows the proposed nine islands at the Avedøre Holme coast. Photo: Ministry of Economic and Business Affairs/Handout via REUTERS/Ritzau Scanpix

The first plots of land will be sold in 2028 and the project, the financial details of which have not been disclosed, should be completed by 2040.

The aim is to attract some 380 companies to the area, located near Copenhagen airport.

“I think this could become a sort of European Silicon Valley,” the head of the Danish Chamber of Commerce, Brian Mikkelsen, told TV2 television.

The mammoth project follows another major infrastructure initiative announced last autumn, whereby 20,000 new homes will be built on a polder — low-lying land reclaimed from the sea — north of the capital.

That development, given the name Lynetteholmen, will rise from the Øresund waters between the Refshaleøen and Nordhavn areas and create homes for 35,000 people.