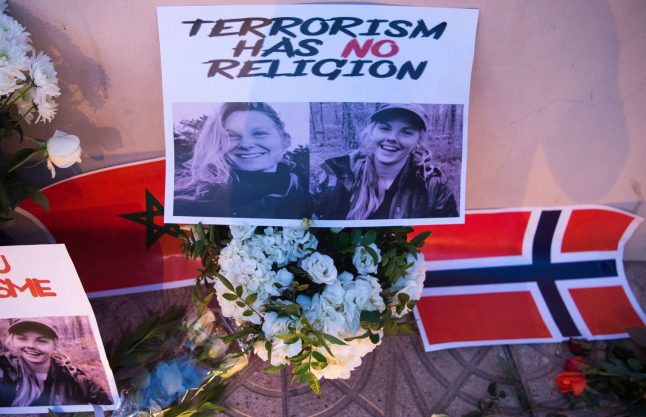 The bodies of the university students, 28 and 24, were found on December 17 and flown to Copenhagen on Friday, a police source said.

Four suspects arrested over the killings had pledged allegiance to the Islamic State (IS) group, according to Moroccan authorities. Nine others have been detained.

A video shared on social media sites that appeared to show the beheading of one of the women is almost certainly real, Norwegian police have concluded.

”Adventurers”, “sociable” and “positive” — just some of the descriptions of the two friends who had been studying outdoor activities at the University of Southeastern Norway.

The pair decided to go to Morocco for Christmas and arrived for a month-long holiday on 9 December.

They had travelled to the foothills of Mount Toubkal, North Africa's highest peak, not far from the tourist village of Imlil.

“The girls took all the necessary precautions before leaving for the trip,” Maren's mother Irene told Norwegian's NRK television.

Photos show the pair laughing and smiling over the years, often outdoors. Maren's mother paid tribute to her daughter by sharing a picture of her on Facebook with her pet dog, a huge leonberger named Alf Herman.

“She could have lived where other people would not have believed you could live,” her younger sister Malin told the same paper.

Originally from Jutland, in west Denmark, Louisa had a rafting license, according to her profile on social networks, and a love for the outdoors.

On November 21, she appealed to friends on Facebook for advice about Morocco ahead of the ill-fated trip.

“Dear friends, I'm going to Morocco in December. Will some of you be in the area or have hiking friends who know something about Mount Toubkal?” she wrote, according to local media reports.

Her university director Petter Aasen told TV2 the two friends had not taken any risks.

“They were well prepared and went to an area where they could travel safely,” he said.

“They have made many trips abroad, together or alone,” he added.

The university is planning a commemoration that will take place on campus in early 2019.

“They were smiling, chatty and sociable,” said Rachid Imerhade, a mountain guide contacted by the agency NTB.

He had met the two friends a few days before their disappearance in Morocco.

“They talked a lot with the other people around,” he added.

Louisa's mother, Helle Petersen, told the Danish newspaper B.T. that her daughter was “always happy and positive. Everyone loved her and she saw the best in everyone”.

Her mother added that she had warned her daughter about travelling to Morocco “because of the chaotic situation”.