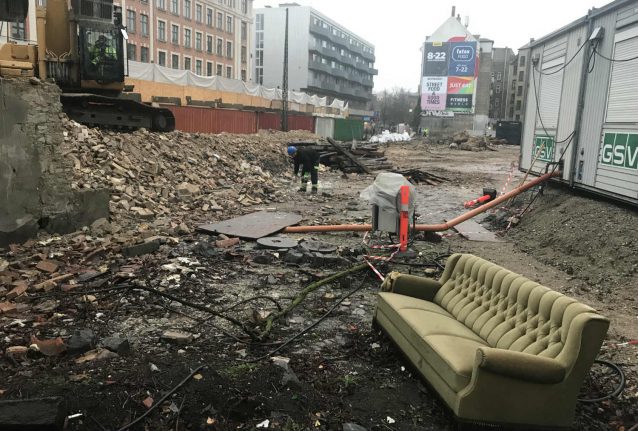 When I first moved to Copenhagen back in 2008, Vesterbro was a very different place to the one we see now. On our first afternoon living in Frederiksberg we set off on a hunt for lightbulbs and we ended up outside an old row of fascinating buildings on Enghavevej close to Tove Ditlevsen’s Mindehave, a century-old restaurant.

Fast forward to 2018 and this historic row of buildings is a pile of rubble waiting to be replaced by a development of luxury apartments, townhouses and cafes called Toves Gård.

The irony of an affluent new development replacing a historic working class one and naming it after the famous writer, Tove Ditlevsen, whose work concentrated on her experiences growing up in working class Vesterbro, is not lost on its detractors. The houses were known as Slagtergårdene or the Slaughter Yards. Build around 1860, the back yard was used to slaughter livestock and the row of houses at the front were homes to the slaughtermen and their families.

Later, the buildings became homes and businesses. This was at a time when Vesterbro was still a working-class area and before gentrification began. One of these houses was the childhood home of Storm P, the famous Danish cartoonist, satirist, actor and writer.

When the demolition of Slagtergårdene was proposed, there was an immediate backlash from residents and community groups who believed that the historic integrity of these century-old buildings should be preserved. A petition was started, as was a Facebook campaign group.

The petition gained over 11,000 signatures but the city council still decided to allow developers to demolish the area and replace it with just over 100 new homes and five businesses.

When I passed by the demolition site a few weeks ago I commented to the older lady next to me on the bus that it was sad to see the buildings go. She responded that people need somewhere to live.

I didn’t get into a debate with her, but I doubt people who can afford the price tag of 3.2 million kroner for a 68 square-metre apartment, or up to 10 million kroner for 170 square-metre family house are short of options for places to live, unlike the women who use Cafe Klare, an overnight shelter for women just a ten-minute walk away. The Slagtergårdene houses prior to demolition. Photo: Melanie Haynes

As I write, the final section of the historic buildings is being demolished. I spoke to a local resident recently who was frustrated by the demolition and what will replace it. Even her nine-year-old daughter and her friends made handmade protest signs when the demolition was first proposed. She commented that history was being lost simply to make a few people money, and that there are plenty of old industrial areas which are being developed to fill the need for new homes without the cost to historic urban areas.

Just over ten years ago, we were shown an apartment to rent on Flensborggade in Vesterbro. It was still being renovated when we viewed it, and outside the window we could see graffiti and drug users. The slightly run-down street of 2008 is now popular with tourists staying in Airbnb apartments.

It was smaller than the other ones we had on our list but the rent was close to the top of the budget. We were told the area would be much ‘nicer’ in the coming years. We were slightly disbelieving of this prophecy and baffled by the high rent.

Ten years later, the area is indeed ‘nicer’. With the fixing rooms on Istedgade and Halmtorvet, many drug users are off the streets and able to fix in a safe environment. At the same time, there are only a few of the original businesses we saw in 2008 and many more coffee shops and expensive boutiques. There are more young, affluent people and families on the streets, sitting on pavement cafe seats drinking expensive coffees. New restaurants are springing up serving ramen, craft beers and tiny burgers, replacing halal butchers, laundromats and corner shops. The bodegas that, just five years ago, had hand-made anti hipster signs in their windows have been replaced by fancy bars and shops. There are a number of old-time businesses hanging in there on Istedgade, but how long they will last is debatable.

The renewal of Vesterbro began in 1989, and at this time 64 percent of homes in Inner Vesterbro were without heating, and 70 percent without bathrooms. The city injected 4.3 billion kroner into the area and now all apartments are connected to district heating and only four percent (at the request of the tenants) are without a bathroom.

This necessary progress has come at a cost to the original residents of Vesterbro, many of whom were displaced, thanks to rent hikes of up to 50 percent. There has certainly been conflict between the new, more affluent residents and the ‘old’, vulnerable Vesterbro, which is still in evidence but increasingly marginalized. Mændenes Hjem (L) is one of a number of community projects still active in Vesterbro. Photo: Thomas Lekfeldt/Ritzau Scanpix

At the time of renewal, around half of residents used their rights to permanent rehousing elsewhere as they feared rent hikes after the assisted period of rent control was over.

Vesterbro is now described by city authorities as having an ‘economically sustainable population’ and the area has undergone a deliberate urban change driven by public policy and market forces. There are still a number of essential community projects — many supported by the municipality — in the area.

The gentrification has not been total, but I am sure there are many people living and staying here who would like to see less of the original Vesterbro outside their expensive New York loft style apartments, coffee shops and hipster hotels.

Increasingly, I feel we are living through a period of time that our kids will look back on and ask why nothing was done to halt the tide of careless and greedy gentrification, all in the name of making already-unique places ‘nicer’.