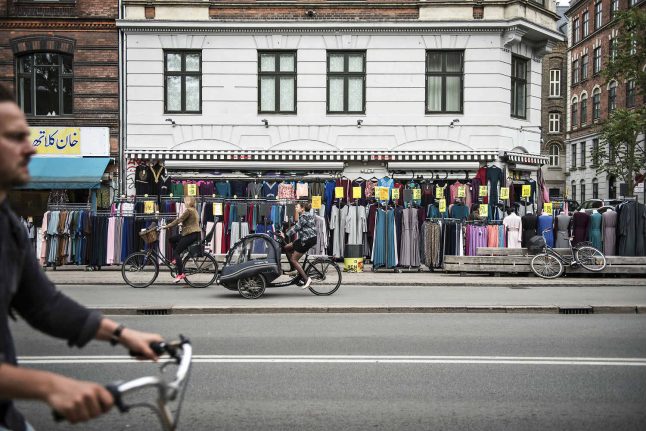 I pedalled hard as I cycled along Nørrebrogade, a busy main road in Copenhagen’s Nørrebro neighbourhood, in chilly weather on Wednesday afternoon.

I was a few minutes late for the recommended arrival time of 12:15pm at Nørrebrohallen, a sports centre and one of 53 locations across the country where the citizenship test was to be taken simultaneously from 1pm. 4,537 people had registered for the test nationwide, according to figures from the Ministry of Immigration and Integration.

There was no need to get too out of breath, as when I arrived there was still a large queue of people waiting to register and hand over their mobile phones for safekeeping before entering the exam hall.

Actually, there was not a queue at all, but rather a disorganised (but calm) crowd outside the side door to the sports hall.

The fact that this poor queueing bothered me at all is an obvious giveaway that I’m British by upbringing, not Danish. More on this later.

Time for some last-minute revision? pic.twitter.com/rEQ4z03PRp

After registering and being given a desk number – 111 – I went inside and found my seat, one row from the back of the hall. Two women sitting adjacent to me had struck up conversation. One, speaking with a Copenhagen accent, explained that she and her older sister were both taking the test today, that the sister was already studying medicine at university. “You’re both so clever,” the other woman, a generation older, replied.

On the other side of me, someone was studiously looking through a printed version of the official learning material for the test, a 148-page document provided by the immigration ministry.

As 1pm neared, the head invigilator gave some brief instructions: mark an 'X' carefully by the correct answer, the test lasts 45 minutes, you can’t leave during the first 15 minutes, that kind of thing. A few rows a head of me, a man of muscular build was shaking, either through cold or nervousness.

Then the test began. I flipped over my paper, feeling a bit like this:

Me turning over the exam paper pic.twitter.com/t7D9CIJjCZ

Since 2015, the Danish citizenship test (indfødsretsprøven), held twice annually, has consisted of 40 multiple choice questions on Danish culture, history and society. The pass mark is 32.

I’d contend that if you have read the ministry learning material and taken tests from previous cycles as practice (they are always published by Danish media after the event, and are easy to find online), then you should be able to pass. This applies, in my opinion (but not that of immigration minister Inger Støjberg), regardless of whether or not you come from a Western country.

I don’t doubt that the amount of time you have spent in Denmark and around Danes will make a difference, though. I’ve lived here for over 11 years, and that meant that I already knew many of the answers without needing to study.

Nevertheless, I was unsure about a few questions. These I skipped over and came back to at the end of the test. The question that caused me the most trouble was about the size of Denmark’s population. 4.7 million, 5.2 million or 5.7 million? I’ve only ever heard it referred to as a rounded ‘five million’ so any of those could apply.

I went with 5.7 million, let an invigilator know I’d finished the test, got up, collected my things and left with around 20 of the 45 minutes to spare. And then googled ‘population of Denmark’. 5.77 million. Lucky for me.

So why did I go to all this trouble?

There are plenty of good reasons. I’ve lived in Denmark for a long time, pay taxes, participate in society and want to feel like a full member of it. I want to have a say in general elections (although I won’t be in time to vote in the next one, which will be no later than June next year).

Time to do it: I've registered for the Danish citizenship test. pic.twitter.com/9cwkKPpCWp

I’m also attracted by the luxury of having two passports, which can make travel more convenient and even open up destinations that would otherwise not be accessible.

Then, of course, there’s the spectre of Brexit – the outcome of which for Brits resident in the EU remains unsettlingly and infuriatingly opaque. Regardless of any eventual Brexit deal, or lack of one, my future as a resident of Denmark with free movement throughout the rest of the EU looks far more secure as a Danish citizen.

Is this good enough? You could argue these are all luxury motivations for applying for citizenship. I’m not stateless. Others taking the test today may have been.

This brings us back to my observation about the queue. I’m still British. I complain about queues. I supported England in the World Cup and if they’d ended up facing Denmark, I’d still have supported England.

Yet I’ve lived here for so long now that Denmark has become embedded in me as a person: what I eat, the way I think, the way I view the world. It’s part of me, so am I justified in wanting to be part of it?

Støjberg was recently quoted as saying the citizenship test, which only has a 50 percent pass rate, should be hard, because there “is something quite special about becoming a Danish citizen”. It’s a mantra she often repeats, understandably so – the last thing she wants is to be seen to be giving citizenship away cheaply.

It’s also something I find myself agreeing with, albeit not in the way she meant it. It is special to build up a close connection with a second country. It adds to who you are, without replacing what was there before.

The results of today’s citizenship test will be sent out some time within the next four weeks, and I’ll know whether I can send my application.

READ ALSO: My best and worst days in Denmark