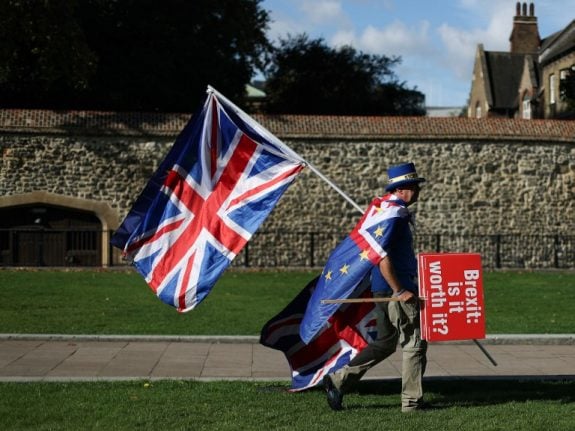 Photo: AFP
The European Commission, the bloc's executive arm, said that, while it is working hard for a deal, it must prepare for “all outcomes” and “contingency measures in narrowly defined areas” may be needed to protect the EU's interests.
If a deal is agreed then the arrangements could still be applied at the end of any agreed transition period – which under the current withdrawal agreement would be January 1st 2021.
In one measure, Brussels said it will offer visa-free travel within the bloc to Britons on short trips, but warned this was “entirely conditional on the UK also granting reciprocal and non-discriminatory visa-free travel to EU citizens travelling to the UK”.
“UK nationals would be exempt from any visa requirement for visits of up to 90 days within a 180-day period. This is entirely conditional on the UK also granting reciprocal and non-discriminatory visa-free travel to EU citizens travelling to the UK.”
Frans Timmermans, the vice-president of the European Commission, said: “We will do upon you what you do upon us.”
However the Commission notes that “the UK government has already declared its intention not to require a visa from citizens of the EU27 Member States for shorts trips to Britain;
The EU says its visa proposal demonstrates its “commitment to putting citizens first in the negotiations with the UK”.
The proposal now needs to be adopted by the European Parliament and the Council.
The Commission published a nine-point advice notice to travellers between the UK and EU about what will happen if Britain crashes out without a deal. It spells out the rights Britons coming to the bloc will no longer enjoy if there is no agreement between London and Brussels.
British driving licences will no longer be recognised automatically by EU countries, leaving UK drivers to check with each country they travel in whether they will need an extra “international driving permit”, the notice says.
At airports, UK nationals will no longer be able to use the priority EU passport queue and will be subject to extra questions about the purpose and length of their visit.
When it comes to health a no-deal would mean Brits would not be able to use the European Health Health cards (EHIC) to access treatments.
The warnings of what will happen in the event of a no-deal Brexit echo those already given by the British government earlier this year.
READ ALSO: They will also see limits reintroduced on the amount of alcohol and tobacco they can bring into the bloc and may have their bags searched by customs officials.
EU rules protecting air passengers will no longer apply to British flights and airlines, meaning that travellers on them may no longer be able to claim compensation if their flights are delayed or cancelled.
Recently introduced EU rules on mobile data roaming will no longer apply to the UK, allowing mobile phone companies to reimpose extra charges for Britons using their phones abroad.
And Britons were warned about rising costs of paying for gods with bank cards.
“As of the withdrawal date, transactions between the EU-27 and the United Kingdom will no longer be covered by the EU rules limiting interchange fees,” read the notice.
“Provided that merchants are allowed to apply surcharges on consumers for card payments, this may lead to a higher surcharge for card payments.”
And Britons have also been told they will lose the right under current EU law to seek consular assistance from any EU member state if they are travelling outside the EU.
“As of the withdrawal date, UK nationals will no longer be able to benefit from this right and EU-27 citizens will no longer be able to turn to UK embassies and consulates to seek consular protection on the basis of EU law,” the notice reads.
But there is perhaps one silver lining for British tourists, they will be able to claim back VAT on items purchased within Europe when they leave.
In today's Communication the EU also outlines priority areas where it is likely measures could be necessary should it appear likely that the UK will leave the EU “in a disorderly manner”.
Among these are citizens' rights and businesses, both areas which could be affected by residency and visa-related issues, as well as financial services, air transport, customs, sanitary, the transfer of personal data, and climate policy.
The Commission has said that: “Any contingency measures would only be taken in limited areas where they are necessary to protect the vital interests of the EU and where preparedness measures are not currently possible.
“They would be temporary in nature, limited in scope, adopted unilaterally by the EU and must remain compatible with EU law.”
Various European countries have been stepping up their own preparations for a no-deal Brexit including France and Germany.