The country of less than six million people is punching way above its weight, boasting men's number one Viktor Axelsen and some of the best doubles pairs in the sport.

Nevertheless, Denmark’s record in badminton is not bad for a country whose tradition in the sport started in the 1920s with four men playing in their garden.

So bearing in mind their rivals include China — population 1.4 billion — just how does Denmark do it?

It is a question that Jens Meibom, director of elite sports at Badminton Denmark, relishes answering.

Meibom told AFP in the Chinese city of Nanjing, where the World Championships are taking place, that there are two main reasons.

“First of all we have a club structure, which is unusual even in a European context,” he said.

“There are a lot of local badminton clubs all over Denmark so it's very easy to play as a young kid and we have a feeder of kids who want to play.”

Denmark's wintry weather helps because freezing temperatures force sports indoors for a chunk of the year, he said.

“The second thing is that we managed to establish a national training centre in Copenhagen where all the best players meet for daily training under four coaches.

“Unlike something like swimming, in which you could be good in your local pool, badminton is a sparring sport and you need to have someone to play against.

“So that means that if you don't bring the best players together, they don't have this elite environment and best sparring.”

Other European countries have looked at the Danish model with envy, even setting up their own national training centres.

“Culture is inside your head and it is about knowledge, one thing is that we are very clever,” he added with a laugh.

With the support of the Danish government, the training centre was set up about 30 years ago and comprises six courts and 30 of the country's best players.

Danish badminton is said to date back to 1925, when a sports shop owner brought back four racquets from England and played with three friends, before introducing it to a club in Copenhagen.

Meibom said Denmark has a proud tradition in the sport, comparing it to Sweden in tennis with greats such as Björn Borg, Mats Wilander and Stefan Edberg.

But he warned that the Sweden example also makes for a cautionary tale — they have been on the slide in tennis since the 1990s.

“Who would have expected Swedish tennis to deteriorate like it did? So we are not taking it (success) lightly,” said Meibom.

Like in many countries, football is the most popular sport in Denmark.

Surprisingly, given their success and the fact they have reigning world champion in Axelsen, badminton is not even as popular in Denmark as gymnastics, golf or handball if judged in terms of participation numbers, said Meibom.

This is a cause for concern and numbers have been steadily falling — until a reverse last year.

According to Meibom, the Danish badminton federation has about 90,000 members, compared to 160,000 some 20 years ago.

“Having a world champion increases the interest in badminton but if the regular, day-to-day training isn't very good, no good coaches, it will stop immediately,” he said.

“It is not enough to have idols because if the local training at the club isn't good enough, they will go off and play something else like football.

“We are depending on kids to play the sport.” 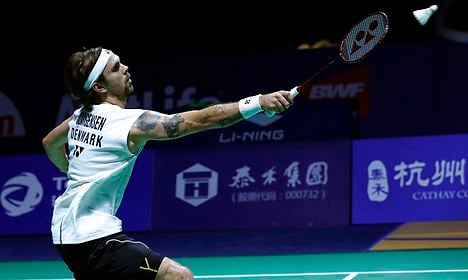