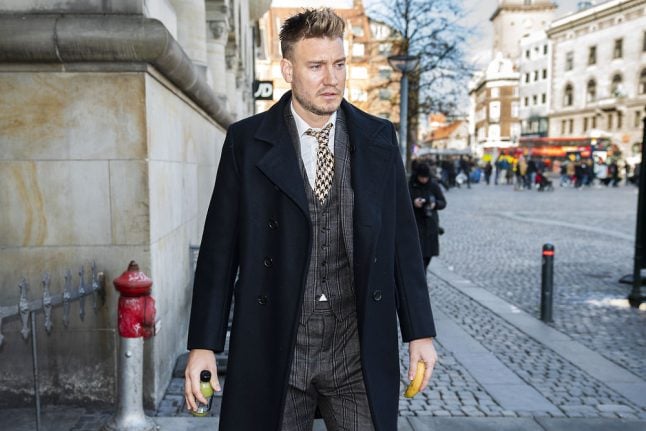 Nicklas Bendtner. Photo: Martin Sylvest/Scanpix
Having missed the summer's World Cup with injury, 30-year-old Bendtner now faces an uphill task to regain his place in the national team after being suspended by the Danish Football Association.
CCTV footage appeared to show Bendtner hitting and kicking the driver in Copenhagen in September with the victim reportedly suffering a broken jaw.
However, the player claimed he was acting in self-defence and his lawyer told news agency Ritzau that Bendtner will be appealing the court's ruling.
“If you are violent, you cannot play in the national team,” the Danish FA's sporting director Peter Moller told Ritzau. “Once his sentence is served, it will be up to [national team coach] Åge Hareide to decide if Nicklas Bendtner should play for the national team.”
However, the striker's Norwegian club Rosenborg have refused to take action against him.
“He will continue as a Rosenborg player,” chief executive Tove Moe Dyrhaug said on TV2.
The former Juventus and Arsenal striker's off-field behaviour has got him into trouble in the past.  In 2013, while at Juventus, he was slapped with a £97,200 (825,694 kroner, €110,708) fine and stripped of his driving licence for three years after being caught drink driving.