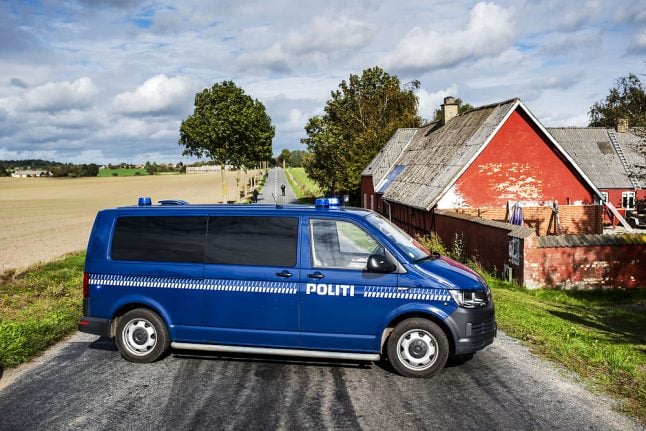 Danish police carried out investigations in the town of Espe on Saturday in connection with the black Volvo. Photo: Sophia Juliane Lydolph/Ritzau Scanpix
Police said that the Swedish vehicle that was sought on Friday has been found, but its occupants are suspected of being involved in a separate, unrelated crime and are not thought to be connected to the threat against an unnamed person or persons.
“The car was found on Zealand and there were two people arrested who have now been released,” Copenhagen Police Inspector Jørgen Bergen Skov said at a Saturday press briefing. “We feel certain that the black Volvo is not related to the threat.”
READ ALSO: Police manhunt shuts connections between Denmark and Sweden
The three occupants of the Swedish-registered vehicle are, however, suspected of being involved in a completely separate criminal incident.
“It could turn out that they are the world’s most unlucky criminals, but that’s just the way it is,” Bergen Skov said.
The black Volvo was reported stolen on September 24th. According to Swedish newspaper, it was stolen at the Malmö Airport.
The case involving the occupants of the Swedish vehicle was being investigated in the town of Espe on the Danish island of Funen on Saturday. Officers were out in large numbers, stopping vehicles and conducting patrols with police dogs. The action in Espe is not related to the investigation into the “threat”. Swedish media reports indicated that the occupants of the stolen Volvo were suspected of kidnapping, but this has not been confirmed by police.
While Bergen Skov made it clear that the Swedish car was not directly related to the threat situation, he was sparse with details on that case, other than to say that the Danish Security and Intelligence Service (PET) believed that specific, but thus far unnamed, individuals “had their lives threatened”.
With the theat known to PET, it thus set off alarms when the black Volvo fled from police on Friday. That in turn led to the closure of a number of major bridges, including the Øresund Bridge that connects Denmark and Sweden, and the Great Belt Fixed Link (Storbæltsbroen) between the islands of Funen and Zealand. Ferry routes, including ones connecting Denmark to both Sweden and Germany, were also temporarily closed, as was all domestic train traffic out of Copenhagen Central Station.
“We react as if it’s a worst case scenario. That’s the way it is when police receive credible information. We need to ensure that there is no threat before we can stand down,” Bergen Skov said.
He said that the individuals targeted by the specific threat are safe and that there was no danger to the general public.
Danish law enforcement officials have updated the Swedish intelligence agency Sapö on the situation.
“This is a Danish police action and we have been in contact with the Danish authorities in order to be informed of the action,” a Sapö spokeswoman told Swedish broadcaster SVT.