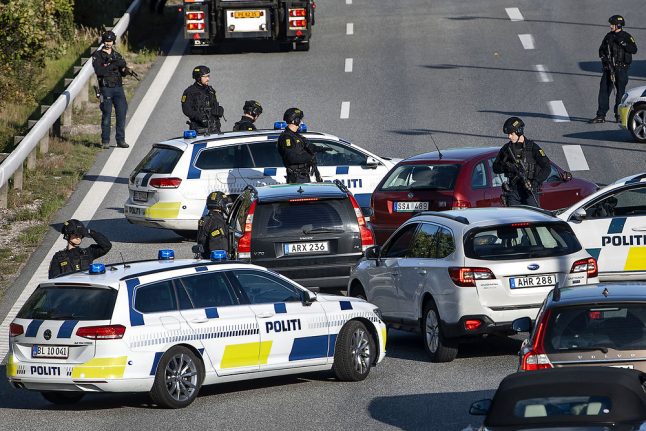 Motorists make their way through a police roadblock on the Danish side of the Öresund Bridge. Photo: Nils Meilvang/Ritzau Scanpix)

The bridge closure was part of a search for a Swedish vehicle whose occupants are suspected of “serious crimes”, according to Copenhagen Police.

“In connection with an ongoing investigation, Copenhagen Police are searching for a Swedish-registered Volvo V90 with licence plate number ZBP 546,” a police press release stated. “In the vehicle there are likely three people who are connected to serious crimes.”

By Friday evening, Copenhagen Police said that the vehicle had been found.

“We have found the vehicle that we believe is the right one. As previously stated, it is believed that it was involved in serious criminality,” inspector Jørgen Bergen Skov said at a press briefing. “We are at a point where we cannot say more.”

Skov was asked if the incident was terror-related but declined to answer. He stressed, however, that the public had no reason to be concerned.

Swedish newspaper Aftonbladet reported that the police action was in response to an alleged kidnapping on Zealand, the Danish island that includes the Copenhagen metro area. The vehicle is reportedly a rental car, but police declined to give further details.

The Öresund Bridge was closed in the direction of Sweden at around 2pm, but traffic in the direction of Denmark was not affected. Police also closed a number of other bridge connections in Denmark, including the Great Belt Fixed Link (Storbæltsbroen) between the islands of Funen and Zealand.

Just before 3pm, Copenhagen Police announced that the re-opening of the bridge was imminent, as was the continuation of train traffic out of Copenhagen Central Station, which had also been temporarily halted.

Jens Genders, a spokesman for the Öresund Bridge Consortium (Øresundsbron), confirmed the closure and said it was done “at the request of police”.  Ferry routes, including ones connecting Denmark to both Sweden and Germany, were also temporarily closed.

The bridges and ferries were reportedly closed to ensure that the Swedish-registered vehicle could not leave the island.

Police confirmed on Friday evening press briefing that the manhunt was not confined to Zealand but also included police searches on Jutland and the island of Funen.

“I spent 41 years in the Danish police, I have never seen such a big action taken before,” Hans Jørgen Bonnichsen, the former head of operations at the Danish Security and Intelligence Service (PET), told local media.