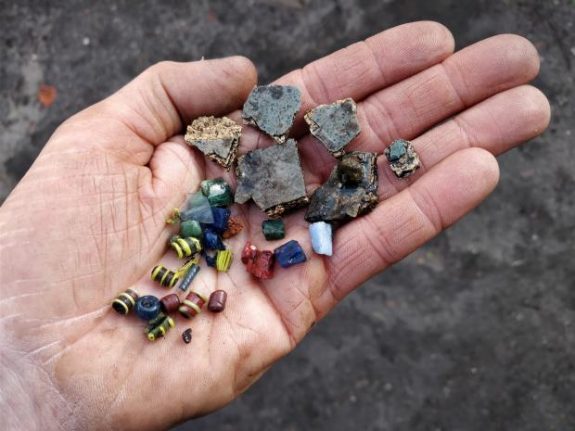 If you want to know anything about the Viking Age, Ribe, in west Denmark, is the place to go.

Archaeologists from Aarhus University and Southwest Jutland Museums have been excavating the Viking city in minute detail as part of the Northern Emporium Project, ScienceNordic reports.

Three-metre excavations have revealed traces of the first cities of the Nordic region.

Deep beneath street level are thousands of Viking finds. We have discovered everything from beads, amulets, coins, and lost combs, to dog excrement and gnawed bones.

We have also been surprised on several occasions, such as when we discovered a piece of a lyre (a harp-like stringed instrument), complete with tuning pegs. This discovery alone gives the Viking trading city of Ribe a whole new soundtrack.

Another extraordinary find is the discovery of runic inscriptions.

Interesting as this is, we have been looking for something completely different. What makes Ribe special is that this is where a city emerged. The people who lived here weren’t primarily farmers for household purposes but were craftsmen, seafarers, tradesmen, innkeepers, and maybe even lyrists.

We have known about the existence of the early period of Ribe for many years, but excavating the deep layers to study this early period is expensive and time-consuming. Earlier excavations have therefore focused on smaller areas. However, two years ago, the Carlsberg Foundation joined the excavation with the funding that made it possible to start a new and bigger excavation.

Meanwhile, new methods of archaeology, including 3D laser surveying, DNA research, and soil chemistry, allow us to tease out new information from the site.

The early period of Ribe is a riddle: How was the city established in a part of the world where no one had ever lived in a city before? That is the question our excavation tried to answer.

Clues from earlier excavations were difficult to interpret, and scientists discussed whether Ribe was simply a seasonal market town for generations before people started to settle there more permanently.

One of the most important discoveries was that solid houses existed in Ribe only a few years after the earliest activities in the area, no later than the 720’s CE. This suggests a more or less resident population – that is a population of trade and craftsmanship in the area, an urban community of sorts.

In the Ancient Middle East and Ancient Mediterranean, cities were placed near each other each with their own temples, palaces, markets and city walls. Each city was at the centre of the surrounding area. Yet early period Ribe and the next-closest city were hundreds of kilometres apart.

On the other hand, it’s evident that people visited the city from far away. It was a city that lived by its networks.

Networks of trade and information are crucial to city life throughout history. But it is a lot harder to observe networks in archaeological excavations than it is to dig up city walls and monuments. In this regard Ribe has an ace up its sleeve: the oldest layers of the city are untouched and this makes it possible to uncover the city’s history decade by decade. In doing so, we can see how the city’s networks developed.

Ribe was an ideal departure point for sailing ships and it’s development depended on them., Around 700 CE, when Ribe was beginning to develop, maritime traffic at the North Sea was in its infancy. But by 800 CE, when the Viking Age is traditionally said to have begun, the sailing ship had its breakthrough in the North.

Commercial cities like Ribe, with their extensive networks, were crucial in the sailing revolution, as the ships were used to trade the cities’ goods with the rest of Scandinavia. And in that regard, Ribe helped create the Viking Age as we know it.

In Ribe we see this change in the remains of workshops. These finds are the real scoop of the excavation. Time after time we get a close-up look at the earliest city-dwellers in the North and the crafts that made them special.

READ MORE from ScienceNordic: The Viking age began in Denmark

Ribe developed an impressive network in the Viking Age, but it was not yet global. This is indicated by several findings.

Analysis of the glass used by bead makers shows that the glass originated in Palestine and Egypt. However, it was already several centuries old when it arrived in Ribe and so it must have been taken from old Roman mosaics, probably in Roman cities such as Cologne or Trier.
We also found a roman carnelian gemstone decorated with the picture of Venus, which had been forcibly removed from the gold ring it must have decorated.

Apparently, the gemstone was of no interest in Ribe. But the gold was. The raw material of the first goldsmiths in Ribe was very likely comprised of objects like these looted from Roman graves.

Other findings point in the same direction. A fragment of the ornately decorated Roman ceramic, terra sigillata, must have been picked up at a Roman ruin or grave and brought to Ribe as an amulet or souvenir. Even though these things originate far away they may have been brought from relatively nearby.

Findings show that the first city of the North appeared before trade with the Mediterranean and Middle East was established. It was another network that kick started the development of Ribe. The results of our excavation will no doubt tell us more about these origins in the coming years.

Søren M. Sindbæk is a professor of archaeology at Aarhus University and participated in the archaeological research at Ribe.

READ ALSO: Danish Viking fortresses were designed to fend off other Vikings