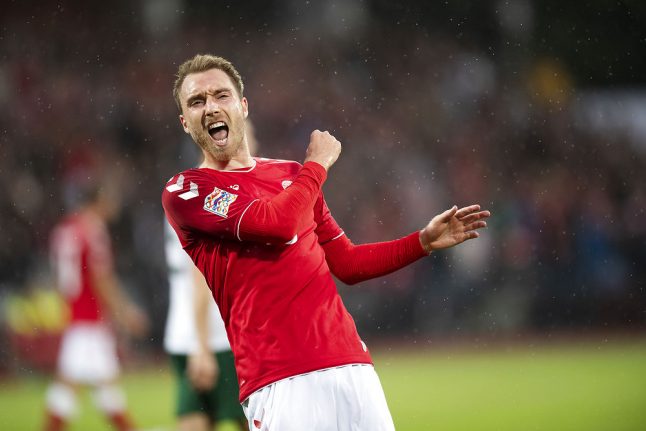 Christian Eriksen celebrates a goal in Sunday's win over Wales. Photo: Bo Amstrup/Ritzau Scanpix
The Tottenham midfielder put the Danes ahead with just over half an hour gone in Aarhus. Eriksen then added a second on 63 minutes from the penalty spot after Ethan Ampadu handled.
Age Hareide's Denmark go top of a group that also includes the Republic of Ireland, who were routed 4-1 by Wales in their opening game on Thursday.
Danish preparations were hit by a standoff between their players' union and the country's football association (DBU) over commercial rights.
The issue led to Denmark fielding a side comprised of lower-league and futsal players in Wednesday's 3-0 loss to Slovakia, but both parties reached a one-match truce to ensure a full-strength squad would face Wales.
“I think no matter how the week developed I think this is what we wanted,” said Eriksen, with both the players and DBU hoping to reach a new agreement ahead of next month's game with Ireland.
“We wanted to play some football, to win and get a good start in this competition. It was a very good start and a very good feeling to finish a weird week.”
Ryan Giggs' men suffered a hitch of their own when a technical problem with their plane severely delayed their arrival in Denmark, and forced the cancellation of a pre-match press conference.
'Look at the positives'
“It's disappointing to lose. We obviously wanted to win the game but I think we have to look at the positives,” said Gareth Bale. “I think we stayed in there, we fought hard. It's all new to us, we're still working on things so it's a process at the same time as getting results and wanting to perform well.”
Thomas Delaney almost produced a sensational opening Danish goal midway through the first half when the Borussia Dortmund midfielder's superb volley from a corner whistled fractionally wide of the post.
Bale, on target in the win over the Irish in Cardiff, then drove just beyond Kasper Schmeichel's left-hand post after the Real Madrid star was given space to run at centre-back Simon Kjær.
Eriksen broke the deadlock with a well-taken effort on 32 minutes, picking up a pass from Henrik Dalsgaard and taking a touch to set himself before stroking low beyond the outstretched arm of Wayne Hennessey.
The Crystal Palace goalkeeper pulled off a marvellous flying stop to deny Pione Sisto soon after, launching himself to his left to claw behind a vicious half-volley.
Connor Roberts and Aaron Ramsey saw efforts blocked in the Danish area after the ball pinged off several players, while Martin Braithwaite dragged an effort wide after evading a host of Welsh challenges.
Eriksen effectively ended Wales' hopes of earning anything from their trip to Scandinavia when he blasted home from the spot after Ampadu handled Viktor Fischer's cross.
A deflected Bale strike nearly gave the visitors a lifeline in the closing stages but a scrambling Schmeichel turned behind, with only a reflex save from Hennessey preventing Delaney from increasing the damage for Denmark.