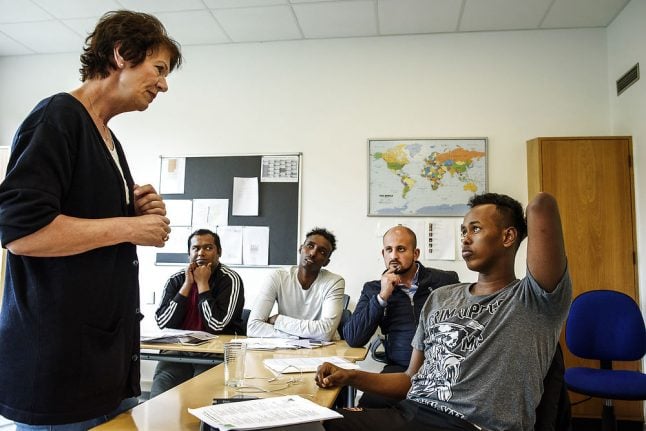 Susanne Clausen teaches refugees Danish at Sprogskolen in Kalundborg. Photo: Niels Ahlmann Olesen/Scanpix
Støjberg spent part of Thursday at the Aarhus software company CloudPartners, where two refugees have become the first to have successfully completed the two-year ‘basic integration education programme' (integrationsgrunduddannelse, IGU).
Launched in 2016 as an effort “to bring more refugees close to the labour market”, those on the IGU scheme are paid a salary of 50 to 120 kroner (€6.70 to €16) an hour for up to two years. The refugees also take part in skill development or education courses of up to 20 weeks.
The IGU programme is currently scheduled to expire next summer, but Støjberg said she wants to see it extended.
READ ALSO: 1,500 refugees have signed up for apprentice scheme: ministry
“I’m of the opinion that as long as refugees are in Denmark, they should provide for themselves,” she said. “And when we have some very strict demands on those refugees who come here, we must also give them the opportunity to actually enter the labour market. IGU is a very good option.”
Over 1,500 refugees have signed up for the programme and the two CloudPartners employees are the first of many who are expected to complete it in the coming weeks and months. But the anti-immigration Danish People’s Party (DF) is not impressed and believes that IGU should be abolished or restricted.
“We don’t think it works. It has been a stunt meant to show that integration will succeed, just like 20-plus other integration plans,” DF spokesman Martin Henriksen said.
READ ALSO: Scrapping refugee apprenticeships could cost councils millions: report
Støjberg disagreed, saying that the programme has been effective.
“We can see that all the actions we have taken have resulted in far more refugees and their family members being a part of the labour market than they were before. Thus I believe that IGU and the other schemes have been successful in getting more refugees to support themselves,” she said.
Støjberg stressed however that completing the IGU programme does not guarantee refugees or their families the right to permanently remain in Denmark.
“The refugees must return home when there is no longer any need for our protection. But as long as they are here, they must support themselves and not burden society,” she said.
There are currently 1,616 IGU participants spread across 999 companies in 94 municipalities. Just over half of the participants are from Syria. The courses are mainly in public administration, retail, transport and freight management.