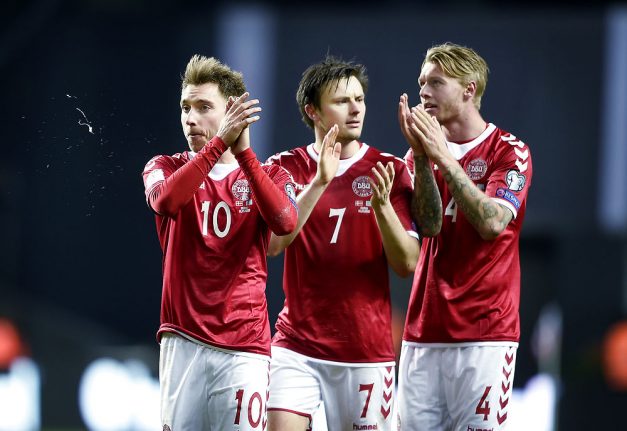 Sunday's match will see the return of familiar faces like Christian Eriksen, William Kvist and Simon Kjær, shown here in a November match against Kazakhstan. Photo: Liselotte Sabroe/Ritzau Scanpix
The Danish Football Association (DBU) announced on Friday that it had come to a temporary agreement with the players’ union in the two sides’ dispute over commercial rights.
The temporary reprieve means that the 23-member squad that will face Wales will be made up of the same players like Christian Eriksen, Kasper Schmeichel and Thomas Delaney, who led Denmark to the last 16 of the World Cup.
Denmark was forced to field a makeshift team comprised of lower-league and futsal players for Wednesday’s friendly against Slovakia. The alternative team lost 3-0 but staved off embarrassment. The temporary squad contained players from the third (2. division) and fourth (Danmarksserien) tiers, along with one of the regional level five leagues (Sjællandsserien) and players from the national team for futsal, an indoor variant of football with five players per team.
READ ALSO: 'We want to help Denmark': replacement national team player
DBU and the players’ union Spillerforeningen will continue their negotiations over a new appearance agreement and are scheduled to meet on Monday. The primary stumbling block in the dispute is reportedly players’ image rights.
UEFA has previously stated that the cancellation of either a friendly match or a competitive Nations League fixture would result in disciplinary action against DBU.
Although the regular players will face off against Wales, they will do so without head coach Åge Hareide on the sidelines. He has been replaced by Euro 92 winner John Jensen as part of the dispute.
Sunday’s match against Wales kicks off at 6pm on Sunday in Aarhus.