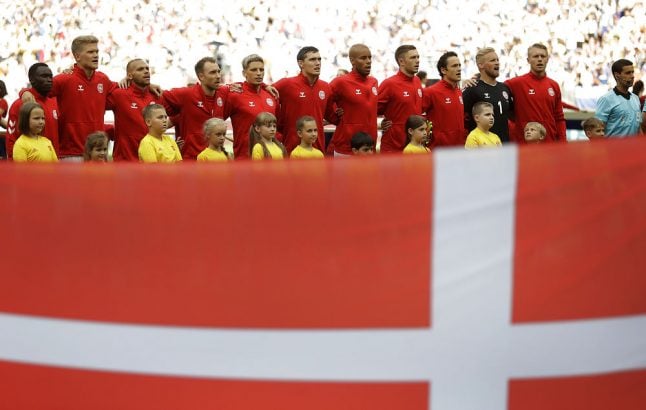 Denmark players line up for the national anthems before the match against France at this summer's World Cup. Photo: Matthias Schrader/Ritzau Scanpix

Denmark’s upcoming matches against Slovakia and Wales have been thrown into doubt by a dispute over image rights.

The players and DBU are currently in conflict over a new contract covering the terms of their appearances for the international side, which reached the last 16 at the World Cup in Russia this summer.

Negotiations over the contract broke down over the weekend, while the players’ offer to play under an extension of an earlier agreement was rejected, Ritzau reports.

That has resulted in the squad not reporting for international duty as scheduled.

The primary stumbling block in the negotiations is reported to relate to players’ image rights.

Broadcaster DR has reported that DBU will now attempt to call up an entirely new squad of players drawn from the domestic league in Denmark. Spillerforeningen, the representative body for footballers in Denmark, has called for all players to reject such call-ups.

DBU also confirmed on Monday that coach Åge Hareide will not take charge of the team for the two upcoming fixtures.

Star player Christian Eriksen, who plays in the English Premier League for Tottenham Hotspur, earlier hit out at the football association, calling its approach to the issue “unpleasant” after suggestions were made that the players were motivated only financially to play for the national side.

“DBU is happy to tell the media that we must think about togetherness and solidarity – as if we don’t care about the team as a whole. But is that not what we are doing when we, for example, always happily take part in DBU’s events for kids?”, the attacking midfielder said.

“It’s not fair to accuse us of not thinking about anyone other than ourselves. It’s actually very unpleasant to hear,” Eriksen added.

UEFA have stated that the cancellation of either a friendly match or a competitive Nations League fixture would result in disciplinary action against DBU.

“Any unfulfilled fixture will result in the issue being referred to UEFA’s disciplinary body,” the European football administrative body wrote according to Ritzau’s report.

Denmark are scheduled to face Slovakia in a friendly match on Wednesday and Wales in the newly-formed Nations League on Sunday.

Slovakia’s football association SFZ told Ritzau on Monday it still expected the match to go ahead.

“DBU has promised the match will go ahead,” SFZ head of communication Monika Jurigova said.

In 2017, a match between Denmark and Sweden’s women’s national sides was called off after talks over players’ contracts broke down. Denmark forfeited the match and DBU was fined 20,000 euros, but the conflict was later resolved.