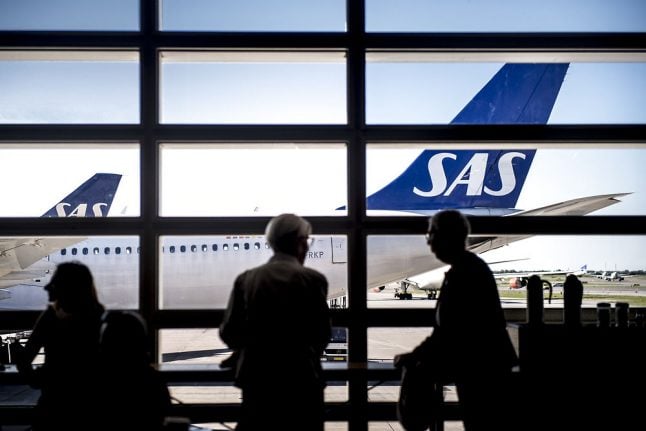 A SAS Airbus A340 at Copenhagen Airport last week. Photo: Mads Claus Rasmussen/Scanpix
The airline said that it had overestimated demand for the winter season.
“It’s often the case that as you get closer to a season, the picture becomes clearer in regards to demand and then you adjust the program accordingly,” SAS press spokeswoman Freja Annamatz told Sweden’s Dagens Nyheter (DN).
Nearly one fifth of the axed flights were to and from Malaga. Those 270 cancelled routes were scheduled to be flown by SAS’s Irish subsidiary SAS Ireland (SAIL). Crew shortages at SAIL and subcontractor City Jet caused SAS to cancel around 700 flights over a three-month period earlier this year.
Other dropped routes include Stockholm to Lisbon and Copenhagen to Riga.
Even with the elimination of 1,500 flights, SAS’s 120,000 scheduled flights for the 2018/19 winter season are still more than the airline offered last winter.
Jacob Pederson, a shares analyst at Danish bank Sydbank, said SAS made the right call to cancel the winter flights so far in advance.
“It’s a good thing to not have too many disappointed customers. There have really been a lot of disruptions to SAS services in recent months so it’s very important that the airline take control of the situation now,” Pedersen told DN.
Even with the summer’s cancellations and the decision to cut back on the winter offerings, Pedersen said that SAS’s use of its Irish subsidiary and cheaper subcontractors have made good financial sense.
“SAS has made a profit over the past three years and they will do so again this year and probably for the next two to three years,” he said. “This is an essential element of SAS’s success but of course it also comes with downsides and SAS definitely needs to address them.
SAS is due to release a new quarterly report on Friday.