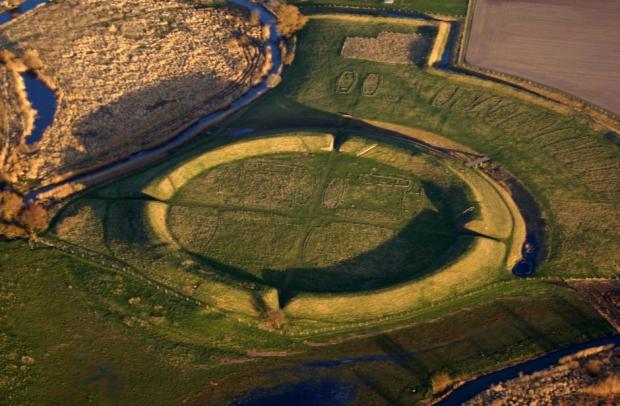 Trelleborg, one of the five Viking fortresses in Denmark, built by Harold Bluetooth at the end of the 900s CE. Photo: National Museum of Denmark

After four years, the excavation of the famous Viking fortress, Borgring, is coming to a close and archaeologists can now describe the fortress in a broader perspective: an anti-Viking defence that allowed the Danish King to forge a new, mobile army.

Four years ago, my colleague Nanna Holm from the Museum Southeast Denmark and I announced our new discovery: a Viking fortress, known as Borgring, in Lellinge, not far from the Danish capital, Copenhagen.

The news travelled around the world, and since then our excavations have continued to cast new light on the Viking Age.

Thousands of visitors have flocked to the site, which has been open each summer as a living museum. But if you want to visit then you will need to be quick, as this summer will probably be the last year of excavations at Borgring.

Here are some of the most important and surprising discoveries made during the excavations. These finds not only tell us about the history of the fortress, but also about the purpose of these unique, ring fortresses.

Borgring is one of five, large ring fortresses from the Viking Age in Denmark. Each of the large fortresses were constructed in a perfect circle and are some of the best known monuments left by the Vikings.

The other fortresses include Trelleborg, Fyrkat, Nonnebakken, and Aggersborg, as well as Borgeby in Southern Sweden. All were built by King Harold Bluetooth who reigned between circa 958 and 987 CE and is best known in Denmark for erecting the Jelling Stone—a large stone with the first written reference to the name “Denmark,” often referred to as Denmark’s birth certificate.

In May 2018, Aarhus University, together with the Danish Agency for Culture and Palaces, held a conference on the Danish Viking Age ring fortresses, which are to be nominated as UNESCO world heritage sites. It was clear that even researchers who had been sceptical were no longer in any doubt that Borgring was one of Harold Bluetooth’s fortresses.

Since 2016, scientists from Museum Southeast Denmark, the National Museum of Denmark, and Aarhus University, Denmark have excavated the site.

We’ve learnt a lot about the fortress’s history, but also about the Viking fortresses in general.

The fortresses are impressive enough on their own. But the most unique aspect is that they were constructed as a coordinated project—a network of fortresses across the country.

Many have tried to explain what purpose the network of fortifications served. Here, it’s important to ask the right questions, as the challenge is to find an explanation that best accounts for everything that we know about these fortresses.

The ring fortresses only existed for a short part of the Viking Age.

Two of the best dated fortresses, Fyrkat and Trelleborg, look to have been established between 974 and 981, and finds from the other fortresses suggest a similar date.

No other large fortifications existed in Denmark in the rest of the Viking Age, from the end of the 700s up to 1000s, except for city walls in Hedeby (in modern day Germany), Ribe, and Aarhus. Chieftains and kings built large halls and farms, but not fortresses.

So why did Harold Bluetooth build five fortresses in the 970s?

This is the central question that has bothered Viking researchers since the fortresses were first discovered. Early in Bluetooth’s reign, a new power was growing from central Europe under King Otto I, who was crowned emperor in 962. Otto’s growing power was probably a crucial factor in Harold Bluetooth’s conversion to Christianity, to avoid becoming Otto’s next target. Many researchers have come to the conclusion that it was the unique set of challenges posed by this situation that led Harold Bluetooth to construct the fortresses.

Otto I died in 973 and was succeeded by his son, Otto II, who attacked Danevirke (in modern-day Germany), upping the threat to Harold Bluetooth’s Denmark, which remained a target for war until Otto II’s death in 983.

These events coincide precisely with activity at the fortresses and can explain the need for such unusual fortifications.

But a mystery remains: If the threat was from Germany, why were they built so far from the Danish-German border, on the islands of Funen and Zealand, and Skåne in southern Sweden?

Another factor can explain the distribution of fortresses around the country: The threat from the south left Harold Bluetooth exposed to other threats from elsewhere, specifically from Norway and Sweden, who might try to exploit the king’s weak position.

And so fortresses were established right across the kingdom. They were a coastal defence: Rather than being Viking fortresses, they were actually “anti-Viking” fortresses.

It was this hypothesis that led us to discover Borgring.

It suggested that Harold Bluetooth must also have had a fortress to protect the east coast of the country, which turned out to be the case.

The excavations at Borgring have revealed a fortress built to the same design as Trelleborg and the other ring fortresses. We also see that the fortifications were well planned and completed swiftly.

The landscape was levelled, and the walls were built in a precise circle, with gently sloping sides inside the fortress. The interior is divided into even sections, with four wooden gates placed at exactly 90 degrees to each other.

There’s no sign of repairs or extensions to the walls, there are only feeble traces of wooden constructions, which could have supported a high wall, and unlike Trelleborg, Fyrkat, and Aggersborg, there are no signs of construction in the interior of the fortress.

But there are traces of a damaging fire in numerous places around the fortress, and deep wheel tracks that suggest long-term use by traffic coming in and out.

READ MORE from ScienceNordic: Did Vikings really fight behind a shield wall?

How can we explain these features? It is possible that the construction was interrupted prematurely, but in this case, we might have expected to see more clear traces of the building process, and we wouldn’t expect to see any later activity.

The wheel tracks suggest that Borgring was sufficiently ready for use, even without the construction of actual buildings or dwellings inside.

This suggests that the primary function of the fortresses was not to house a permanent settlement, but to allow people to flee there for short periods of time.

This function as a place for refugees to seek shelter points to a new and stronger connection between the fortresses and Harold Bluetooth’s war against Otto II.

The war with the south meant that Harold needed to call up reinforcements from all of the supporting chieftains to gather warriors along the southern border.

Constructing the ring fortresses allowed Harold to consolidate his power throughout the kingdom in a way that no other king of Denmark had done before.

The large buildings of Trelleborg suggest that some of the fortresses came in due time to take on a more active role as settlements or perhaps winter camps for warriors. But first and foremost, this network of fortresses allowed the king to exploit his chief military assets, warriors, more effectively.

These warriors did not man the fortresses, which were, on the contrary, a means of protecting the portion of the population who were not warriors. This was a decisive countermeasure that allowed Harold to defend and win the war in another part of the kingdom.

Excavations at Borgring have revealed new pieces of the puzzle to understand all of Harold Bluetooth’s fortresses.

You can still catch a glimpse of the excavations of the walls and west gate, before this little piece of Viking Age Denmark will be covered by soil and grass once more.