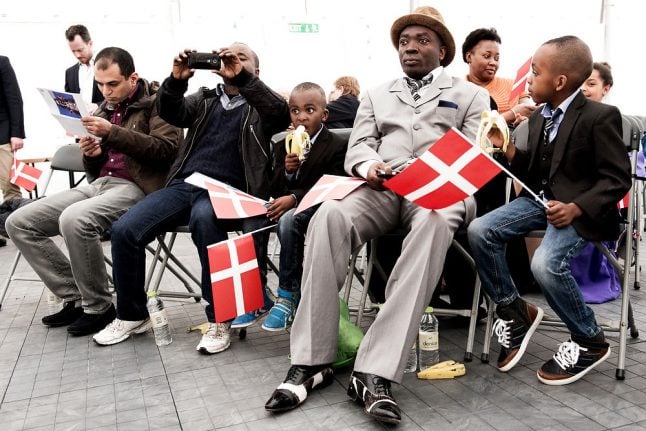 People at a citizenship ceremony in 2015. Photo: Linda Kastrup/Scanpix 2015

New rules require people who have been awarded Danish citizenship to take part in ceremonies in their local municipalities.

Participants at the ceremonies are required to sign a document promising to respect Danish values.

That must be considered to include shaking the hand of the lord mayors at such ceremonies, MPs from the two conservative parties say.

“We wanted to include a handshake requirement as part of the citizenship document. That ended up as a compromise about acting with respect. That, in our view, means shaking the hand of the lord mayor or other person conducting the ceremony,” the Danish People’s Party’s spokesperson for immigration Martin Henriksen said.

“We expect the government and the Social Democrats to support the Danish People’s Party when it comes to applying this in practice,” Henriksen added.

The coalition government, parliamentary ally the Danish People’s Party (DF) and the Social Democrats all voted in favour of the citizenship bill which introduced the new ceremonies as part of the process of becoming a Danish national.

“(Applicants) must accept the whole package, and that package includes a ceremony at which you make a statement of loyalty and shake hands. We shake hands in Denmark,” said the Conservative Party’s spokesperson Naser Khader.

Khader added that he did envisage this causing problems in practice.

“For some of the people that want citizenship, this means so much that they would give their right arm. I’m sure they’d also give their hand,” he said.

“When a female mayor offers her hand at the ceremony and says ‘congratulations on becoming a citizen’, it is completely natural for the new citizen to return that handshake,” Krag said.