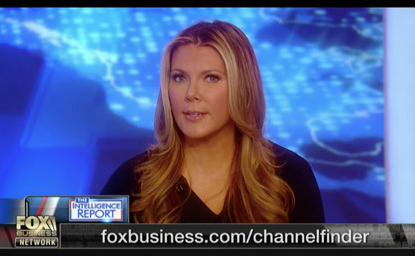 Trish Regan said she did not seek to liken conditions in Denmark and Venezuela. Photo: Fox Business screengrab

In the Fox Business Network item, Regan claimed Danes do not want to work or finish their studies, cited incorrect tax, employment and education figures, and said that “Denmark, like Venezuela, has stripped people of their opportunities.”

Fox Business, owned by the Fox News Group, is the most-watched business news station in the United States.

“I do want to clarify my point from a segment last week on socialism,” Regan said in a statement supplied to news agency Ritzau on Tuesday.

“Just to be clear, I was never implying that conditions in Denmark were similar in any way to the current tragedy on the ground there in Venezuela,” the presenter said.

“I was merely pointing out, using reports from The Atlantic, The Independent and other publications, that socialism is not the way,” she added.

A video of Regan’s statement was also posted on the Fox Business News website, but not on the network’s social media channels.

After the segment spread online on Monday, people in Denmark responded by pointing out factual inaccuracies in Regan’s monologue.

READ ALSO: Why Fox Business' comparison of Denmark and Venezuela is built on fallacy

Minister of Finance Kristian Jensen called Regan’s report “completely exaggerated and lacking in credibility” and criticised what he called the “overly politicised” nature of media in the United States.

Dear @trish_regan. We did some quick research on #Denmark’s global rankings (https://t.co/IYtJ4jU2th). Useful context to your story abt state of affairs in my country. Go see ?? for yourself (we would love to assist) although lack of cupcake cafés probl will be disappointing ? pic.twitter.com/BwU1wukSsV

The Danish Social Democrats also responded in the form of a video in which MP Dan Jørgensen rebuts Regan’s claims.

Something is rotten at @FoxNews pic.twitter.com/tjvwj23bl1

Regan clarified in her comments Tuesday that she had not sought to liken conditions in Denmark to those in Venezuela, but did not address her use of inaccurate or misleading information about tax, education and employment.