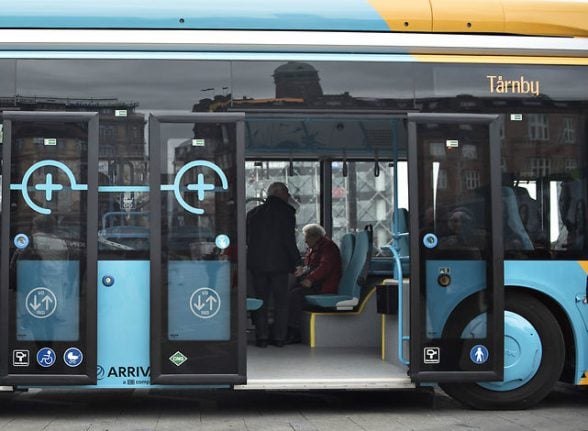 Khan was assaulted by a 38-year-old passenger on a city bus in Copenhagen on Sunday morning after asking him to be quiet, Jyllands-Posten and other media reported earlier this week.

The man subsequently became violent and punched Khan in the face, breaking his nose.

The incident happened near Copenhagen Central Station at 6:50am on a 5C bus headed in the direction of Amager and Copenhagen Airport.

The bus was subsequently stopped and the 38-year-old assailant was detained after police arrived at the scene. He will be charged with assaulting a person in public service but was not remanded in custody, Jyllands-Posten reported.

Canadian journalist André Picard of The Globe and Mail, who was on board the bus at the time, later tweeted his observations about the incident, considering in particular the diverse cultures of the passengers and people that helped Khan after the incident and the subject of mental health.

Picard initially wrote that Khan had been stabbed, but later corrected this, noting that he was only punched. The tweets caused the incident to gain attention far from the Danish capital.

Please indulge me for a rare (but brief) thread of personal comments.
I was on a city bus in Copenhagen early this morning. A young man clearly suffering from mental illness was screaming angrily. Not an unusual occurrence on urban transport. Passengers ignored him. 1/

Suddenly the man rushed to the front of the bus and began viciously punching and stabbing the driver. A passenger intervened – he disarmed and subdued the man. (Turns out he used to be a police officer in Syria.) Two women in hijabs came to the bus driver's aid. /2

One was a nurse from Somalia. The other was a nurse from Iraq. (The bus route services a major hospital.) Police arrested the man. The bus driver, despite his injuries, asked police if they could ensure the man got help for his “mental sickness.” 3/

Denmark, like many Western countries, is having a fierce public debate about the place of immigrants and whether they can adapt to Western culture and values. This incident I witnessed on the city bus was frightening but, in many ways heartening. 5/

Khan, 54, has since spoken about the incident in an interview with trade union magazine 3F.

“He was a foreigner and spoke English to me. He shouted, waving his arms, ‘You are taking my country. I want to kill you all.’ He was a trouble maker, and the passengers were scared and quiet,” Khan told 3F.

The bus driver said he looked in his mirror to check whether the aggressive man had attacked any of the other passengers, before addressing him over the bus’ loudspeaker system, saying, “Sit still, or I will call the police”.

At that point, the bus had slowed on an approach to a traffic light and the man moved down the aisle towards him, Khan recounted.

“You mother fucker. You want to call the police?”, the man shouted at Khan before swinging at him with his right fist.

“I was completely out of it for ten seconds, blood was pouring out of my nose. There was blood on my shirt, on the dashboard – everywhere,” the driver told 3F.

Khan, who has driven buses in Denmark for six years and in Bangladesh for 12, was able to bring the bus to a halt in his dazed state.

The attacker then calmed down, possibly due to surprise at the sight of the blood, according to 3F’s interview.

“I didn’t open the bus doors, because then he could just get away. But he began walking up and down the aisle and shouting, ‘You have to drive now’, so I was scared he would hit me again. I prayed the police would come soon,” Khan told the magazine.

Two passengers assisted Khan and called the police, who arrived on the scene a few minutes later, 3F writes.

A taxi driver and a doctor also entered the bus to offer their assistance.

“[The doctor] said I needn’t be afraid, that she could stop the bleeding. I am very, very appreciative and grateful for the help they all gave me,” Khan said.

The 38-year-old assailant allowed himself to be detained by police without further incident.

Khan also told 3F that he had been assaulted while at work once before. On the previous occasion, a group of youths who refused to put out their cigarettes on the bus took him by the collar and hit him in the face.

“It was very unpleasant, but I am not afraid to drive again,” the 54-year-old told 3F.

“I was the chance victim of an idiot who was having a bad day. That only happens rarely. I said that to the passengers [many of whom were travelling to the airport, ed.], who could not understand how this could happen in peaceful Denmark.

“I’m just happy he didn’t have a knife or a pistol and that I was able to stop the bus so that nothing happened to the passengers,” he concluded.