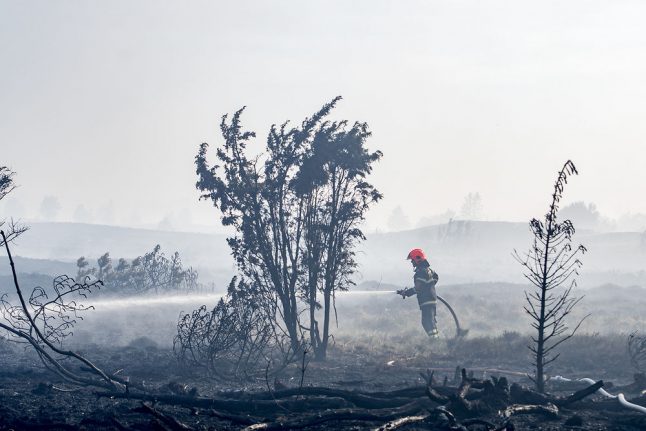 Fire services work to put out a fire at Frederikshåb Plantage and Randbøl Hede in Jutland in May this year. Photo: Michael Drost-Hansen/Ritzau Scanpix

Blazes in grassy areas, verges, corn fields, forests and brush are among those caused by the dry weather. A significant increase has been seen in fires in natural areas as a result of dry weather, Ritzau writes.

“This weekend we have seen fires in North Jutland, Central Jutland, and South Jutland. The bigger nature fires have been in Jutland this year,” Lars Høg Schou, head of operations with Beredskabsstyrelsen, the Danish fire service, said.

“That may be due to the large areas covered by fields. There is also sandy earth, which may be dry. And there are also many farm areas and pine forests, where there is flammable material on the ground,” Schou added.

The 449 fires in natural areas in June is a far larger total than the average of 194 for the month recorded over the last five years.

Harvesting of corn using machinery can also result in fires caused by sparks from machinery.

“Yesterday a combine harvester in Haderslev set fire to a field while it was harvesting. A stone may have got into the machinery and caused a spark. The fire started in the bales it was making,” Schou said.

The trend has continued into July, with 160 nature fires registered in the first five days alone – seven times more than the average for the corresponding week taken from figures from the last five years.

While there are a range of causes related to the fires, some were started by cigarette butts or by disposable barbecues being left on the ground, the fire service chief said.

Although some rain is forecast for the coming days, the amount is not expected to be enough to put a dampener on the increased fire risk.

A ban on open fires that was extended to apply to the entire country on July 4th is therefore expected to remain in place for the time being, Schou said.

READ ALSO: Denmark's drought is a boon for some insectivores, but others are struggling