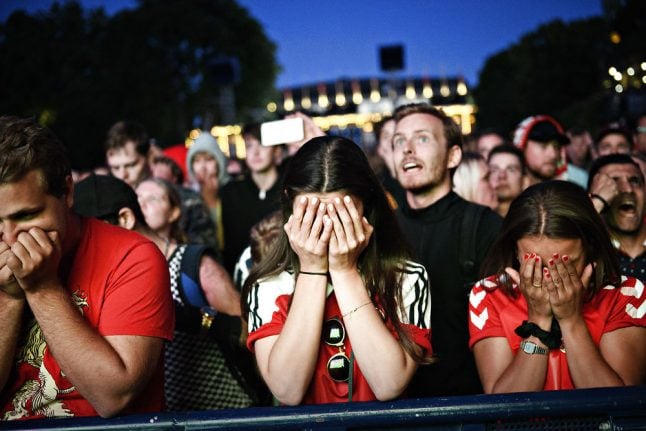 Although Denmark finished on the losing side in Nizhny Novgorod, goalkeeper Schmeichel turned in one of the finest performances of his career, saving a penalty from Croatia captain Luka Modric deep into injury time before keeping out a further two spot kicks in the shootout.

But that was not enough to prevent an overall 3-2 win for Croatia on penalties after Eriksen, Lasse Schöne and Nicolai Jørgensen all saw their efforts saved.

“Of course we let him down,” Eriksen said in reference to Schmeichel after the match.

“When a goalkeeper saves two penalties (in a shootout) you have to win, because you must then score your own penalties,” he said.

“But that is easier said than done, and I can understand if Kasper is disappointed because he played a very good match,” the attacking midfielder continued.

Eriksen stepped forward to take Denmark’s first spot kick after the last-16 match finished 1-1 after extra time, only to see his effort pushed away by Croatian ‘keeper Danijel Subasic.

READ ALSO: Denmark out of World Cup after falling to Croatia on penalties

“I didn’t think about the circumstances when I walked down there (to take the kick). I was thinking about putting the ball in the net, and that’s what I had hoped and imagined would happen,” he said.

“I had a plan for my penalty, but the plan didn’t work out, so I should probably have done something else,” said Eriksen, who scored 11 goals in 12 games to help Denmark qualify for the finals and added to that tally by scoring against Australia in the group stages.

Schöne said he felt “very bad” for missing his penalty, while Jørgensen, who missed the decisive kick, declined to speak after the match.

Denmark’s two successful penalties in the shootout were scored by captain Simon Kjær and veteran Michael Krohn-Dehli, who announced his retirement from international football following the loss.

Schmeichel, who has been praised as a hero in Danish media for his efforts, said he believed Denmark could have gone all the way and become World Cup champions had they prevailed on Sunday.

“You should not enter a tournament if you don’t believe you can win. We would have faced Russia in the quarter final and a lot of big teams have gone out in this round, and we would have had opportunities,” he said.

He also praised his teammates and backroom staff with the national side.

“I’m left with a feeling of pride. Not just of the team on the pitch, but also the team behind them and of the players that don’t play, but show up to training every day and give everything they’ve got.

“Everything’s great when you’re playing, but those who aren’t in the team are just as far from their families and don’t get as much recognition for what they do. That’s the case for the physios, kit men, everyone. I’m very proud of them, and they deserve just as much praise as all the players,” Schmeichel said.