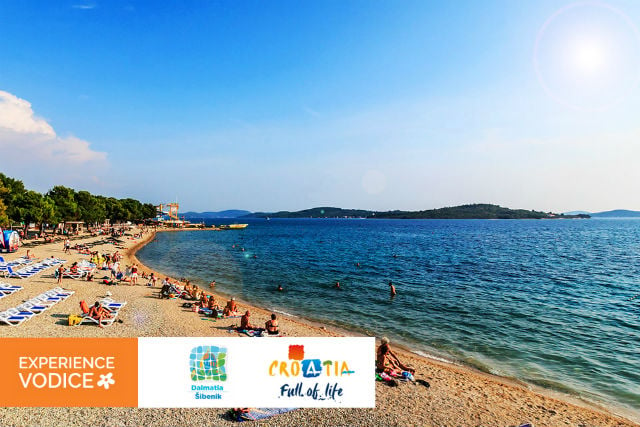 Vodice is a vibrant tourist destination that sits next to the sea in a wide bay. The beaches are pristine and the hidden coves are great for those who are seeking some peace and quiet. Another plus is that the water is always warm in Vodice! Male Vruje beach forms a closed lagoon and pool that has a warmer temperature, which allows you to enjoy the sea from early spring to late autumn.

Start planning your vacation in Vodice The centre of Vodice is dominated by a large marina with more than 400 berths. The surrounding archipelago is a sailing paradise. The nearby Kornati National Park has a multitude of rocks, coves, islets and capes that are bound to leave you breathless. Kornati is an unspoiled oasis for those who want to enjoy pristine nature and swim in crystal-clear waters. It is a place to unwind in seclusion before returning to the outside world. However, Vodice has much more to offer than the sun and the sea. Vacationers who like to stay active can go hiking and cycling, while scuba diver enthusiasts will relish exploring the seabed. Don’t miss the chance to investigate the shipwrecks and experience the beauty of underwater gardens while diving. If you prefer keeping your head above the water, big game fishing in Vodice will give you a pure adrenaline rush. Enjoy the pristine ocean view while testing your strength by taking on some of the biggest fish in the Adriatic. If you’re looking for an adrenaline-packed activity holiday with a beautiful view of the Kornati archipelago, then Vodice is the perfect place for you! Prvić Island is just an hour’s boat ride away from Vodice. Previously, it was a seaside retreat for noble families in the sixteenth century. Today, it is the resting place of Faust Vrančić, the inventor of the parachute, suspension bridge and olive mill. The serene and relaxed lifestyle of Prvić Island is a must see when in Vodice. Start planning your vacation in Vodice

Vodice’s food is excellent for the soul and the stomach. Take an afternoon off and walk through the markets with traditional Mediterranean delicacies or enjoy wine at one of the many restaurants in town. It’s a paradise for every foodie! Vodice also offers a plethora of culture and entertainment events all year, and has excellent nightlife for everybody. If that doesn’t suit you, then local customs, festivals, klapa nights and Dalmatian celebrations will provide historical insight into the town. There are many types of accommodation available in Vodice, from hotels and apartments to private rented rooms and campsites. Regardless of whether you’re interested in an action-packed holiday teeming with sports activities, relaxation and wellness, partying at the beach or simply a place to entertain business partners, Vodice has everything you need. Feel right at home with all the available amenities or simply enjoy the surrounding nature. Vodice is a place where dreams of the perfect holiday become a reality. And this year, why not make it your reality?

This article was sponsored by Vodice Tourism Board, Dalmatia Tourism Board and the Croatian National Tourist Board.