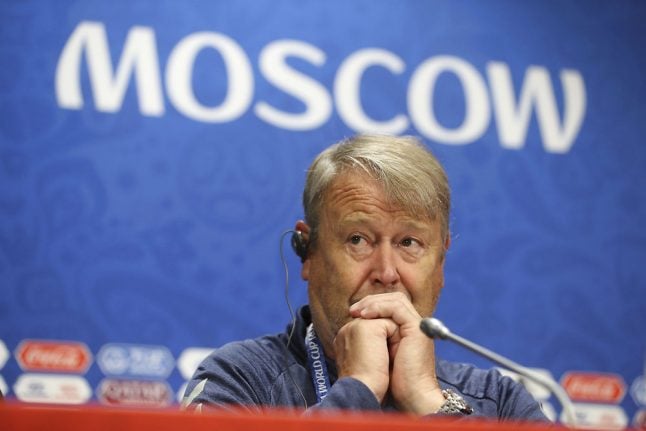 Coach Åge Hareide said the Danes would go in search of victory, resisting the dangerous temptation to look to settle for a draw in the match, which kicks off at 4pm Danish time at the Luzhniki Stadium in Moscow.

“I know one point will be enough but that's not a good way to start the match,” Norwegian Hareide said.

“If you put that into your players' heads there will be passiveness in the team and that's not good.”

“It will be a tough match tomorrow,” Hareide added. “The players worked very hard in the first two matches.

“We haven't done our best in terms of play but we've worked very hard for the points. We can't ask for more.”

Hareide singled out a number of French players as potential danger men as he spoke on Monday ahead of the match.

“France have a team with so many good individual players,” he said.

“With (Paul) Pogba you know what he delivers as a player, you can't really compare with anything in Europe. And you have (Antoine) Griezmann up front, those are two pre-eminent players.”

Denmark would qualify regardless of how they fare against France if Australia fail to beat Peru in the other Group C match in Sochi. France, on six points, are already through to the knockout phase but would drop to second place in the group if they were to lose to Denmark.

Hareide admitted he and his coaching staff would be keeping an eye on proceedings in the match in the Black Sea resort city.

“We do have communication with our guy who is there and my assistant Jon Dahl (Tomasson) will receive the information,” he said.

“We will know how that's going on an ongoing basis. I'm not sure I'll tell the players though.”

Meanwhile, Hareide said his pre-tournament critical remarks about Tuesday's opponents France were “taken out of context.”

In the run-up to the tournament, Hareide was quoted as saying the French side was “nothing special” and that they lacked a “leader such as Zinedine Zidane”.

“First of all these were things taken out of context,” Hareide said in Moscow on Monday. “If you'd read the whole article you would have seen I was comparing with the '98 team [which won the World Cup on home soil, ed.].

“You can pick anything from an article you like, but I was just comparing with the best version of France we have ever seen.”