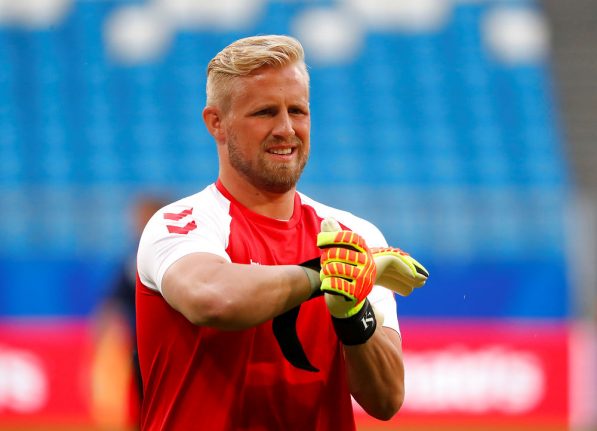 The Scandinavian side kicked off their campaign with a 1-0 win against Peru, in which the goalkeeper pulled off a string of fine saves before forward Yussuf Poulsen hit the winner.

Australia are under pressure after a 2-1 opening defeat to France, despite impressive support from fans dressed in green and gold.

The Socceroos expect more of the same after thousands of fans made the five-hour taxi ride to Samara from Kazan — instead of flying west to Moscow then back east again — but Schmeichel is not concerned.

He expects a battling display from Bert van Marwijk's men, but said the Danes are ready to take a step towards the last 16.

“Australia had a really good game against France. They were unlucky not to get something from the game,” said Leicester's Schmeichel, the son of Manchester United legend Peter Schmeichel.

“They've got some good players, they're very organised, very compact when they defend, good creative players with speed on the wings. We're expecting a really tough game.”

He added: “We've seen that some teams have a huge backing… but it doesn't make a difference to us. At the end of the day it's 11 men versus 11 on the pitch.”

After an impressive defensive display against France, Van Marwijk is hoping the Socceroos create more chances.

Goalscorer Poulsen believes Denmark can play better and said playing “away from home” in the World Cup will not trouble them.

“Last time it was like we were playing away from home,” he said. “People were more worried last time against Peru than they will be tomorrow against Australia.

“We got the three points, that gives us confidence and it helps us towards the next match.”

He said the mental aspect could make all the difference, adding: “If you're mentally ready, you're willing to go the extra mile.”

Denmark's match against Australia kicks off at 2pm Danish time on Thursday.