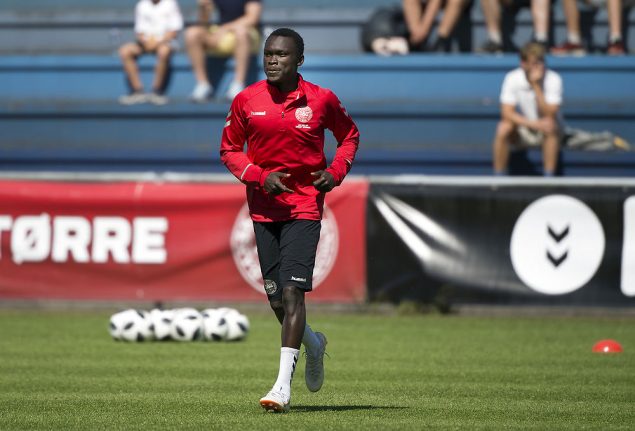 On June 17th, 2015, then-20-year-old Pione Sisto, a youth product with Danish Superliga side FC Midtjylland, scored the decisive goal in a 2-1 win for Denmark’s Under-21 side against the Czech Republic in Prague.

The victory in the opening match of the U21 European Championships was hardly front page news, even in Denmark. But it made the front of one newspaper, and in some style.

“Today I’m a Danish Matchwinner: Once, I was a Refugee”: proclaimed the sports section of tabloid Ekstra Bladet, which was, up to that point, not known as a champion of positive stories about refugees.

The second clause of the headline was written as a hashtag, reading as #EngangVarJegFlygtning in Danish. The hashtag had been trending on social media in the run-up to that year's general election.

With immigration, as it often is, a key topic in election campaigning, many people were using the tag to highlight their personal success stories since arriving in Denmark as refugees.

After the youngster's winning goal for the under-21s, Ekstra Bladet’s headline shot the hashtag – and the catchphrase – into the stratosphere, making Sisto a household name in the process.

“It is not a political statement, merely two factual statements. The matchwinner and his background as a refugee along with his family. If some people interpret it politically, well, let them. Sport and politics are and always will be inseparable. It’s bloody naïve to think anything else,” Ekstra Bladet’s sports editor Allan Olsen wrote subsequently.

Sisto was indeed once a refugee. Born to South Sudanese parents in Uganda, he arrived in Denmark at the age of two months. He received Danish citizenship in 2014 – just a year before his goal in Prague.

But the winger’s career arc and performances since Ekstra Bladet’s inspired 2015 headline have ensured that his sporting reputation is no longer defined by his former political status.

A tricky dribbler blessed with lightning pace, he became a regular in the FC Midtjylland first team in the 2012-13 season. Sisto moved – 112 appearances and 28 goals later – to La Liga side Celta in July 2016.

The move to Spain came at the end of a campaign in which he scored twice for Midtjylland against Manchester United in the Europa League, including a memorable dribble and strike from the edge of the box in the home match. He had already graduated from the U21 to the full national side, having made his debut under former manager Morten Olsen the previous year. Olsen’s successor, Norwegian coach Åge Hareide, then put his faith in Pione at international level as the nitty gritty of qualifying for the 2018 World Cup got underway.

He has now started every game for the Danish national team since October 2016. The Red and Whites successfully qualified for the finals in Russia after hammering Ireland in a play-off match. Sisto scored his first goal for his country in a friendly against Panama at Brøndby Stadium in March.

Meanwhile, his assists statistics for Celta reached such high levels that, at one point earlier this season, he trailed only one player – Manchester City’s David Silva – in the charts for the whole of Europe, earning himself the nickname ‘Pione Asisto’.

“I have always known I have an eye for my teammates, even though I also like dribbling. I’ve been good at assisting recently,” he told broadcaster DR at the time.

Hareide has said that the player has improved dramatically since his move to Spain and has the ability to be the difference at the World Cup.

Denmark's first match in Russia is against Peru in Saransk on June 16th before a clash with Australia in Samara five days later. They travel to Moscow to face France in their final group game on June 26th.

“Sisto has developed his play incredibly at Celta Vigo. Especially in his defensive work, where he has been fantastic for us in recent games,” the coach said to DR during the qualifying campaign.

But the young attacker seems to trust his attacking ability as much as anyone.

Danish fans will be hoping that confidence is one of the features of this year’s World Cup finals. If it is, Sisto could well be on front pages again, this time for his matchwinning ability alone.