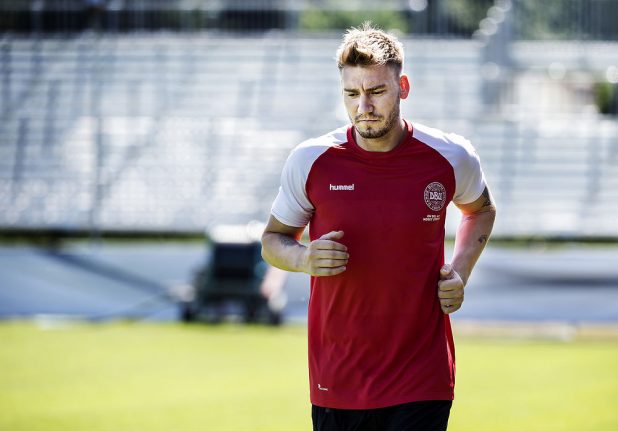 Andreas Bjelland, Mike Jensen and Peter Ankersen were the other players to miss out as coach Åge Hareide finalised his selection.

Former Arsenal striker Bendtner last year returned from a two-year exile from the national team after rediscovering his form.

But the 30-year-old, who now plays in Norway for Rosenborg, has been left out of the World Cup squad because of a persistent groin injury picked up while playing for his club.

Left-footed Brentford centre back Bjelland, who played in six of Denmark's qualification matches including the play-off games against the Republic of Ireland, also loses out to injury while Jensen and Ankersen were the remaining players facing disappointment.

“Bendtner and Bjelland are out because we don’t think they’ll be fit for the first match against Peru. It’s too soon. That match will be very important. And we have swapped Mike Jensen with (Michael) Krohn-Dehli [of Spanish club Deportivo de La Coruña, ed.],” Hareide said in a video posted to the Danish football association’s Twitter account.

Hareide also said that he had decided to include an extra attacking player in his squad, and had therefore chosen physical forward Andreas Cornelius, who plays for Atalanta in Italy, in preference to F.C. Copenhagen defender Ankersen.

The Norwegian coach suggested that he considered the first of Denmark’s three group games, against Peru on Saturday 16th June at the Mordovia Arena in Saransk, to be crucial in determining progress from Group C.

“We are looking at the Peru match because it is so important for us. We are probably battling with Peru and Australia for second place. So it is important to get a good start, so we need players who are in form,” Hareide said.

“Bjelland and Bendtner have been in training after injuries and we don’t think they’ll be fit for the first match,” he added.

The 81-cap striker took the news with his chin up, according to his coach.

“Bendtner stood up and asked whether he could say something, and then wished the team good luck with the job in Russia. That’s how it is. It’s become a close-knit group, and it is just as hard for the players [to leave someone out] as it is for me,” Hareide said.