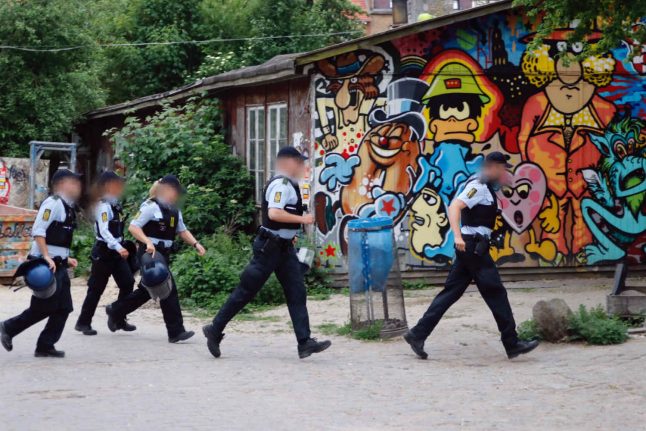 Stands selling marijuana were destroyed during the raids, Deputy Chief Superintendent Lars Ole-Karlsen, who leads the special unit tasked with the raids, confirmed to Ritzau.

But sellers in the alternative enclave do not yet appear to have accepted the outcome of the police operations, the news agency reports.

Several of the stands are reported to have been rebuilt or patched up early on Monday.

Last week, the market area was fenced off for three days, reportedly due to internal discussions between residents.

Ritzau reports that concerns over increased violence and a “bad atmosphere” were related to the temporary closure.

Although Pusher Street was opened again Friday, police have now chosen to take the opportunity step up efforts against the marijuana market.

“Good work by our police in Copenhagen this morning. Farewell Pusher Street,” the minister wrote.

Godt arbejde af vores politi i København her til morgen.

Earlier this month, opposition MP Henrik Sass Larsen called for hash to be legalised, saying that “everything we've done in the last 50 years has been in vain” in treating the substance as illegal.

Larsen’s comments do not reflect the official position of his party, the Social Democrats.

Tensions between people in Christiania and police appear set to remain at a high level.

“We are continuing the strategy we have had of late, only now with more resources and thereby an intensified effort,” Ole-Karlsen previously said, Ritzau reports.

He repeated those sentiments on Monday.

“If the stands are rebuilt, we'll remove them,” he said.