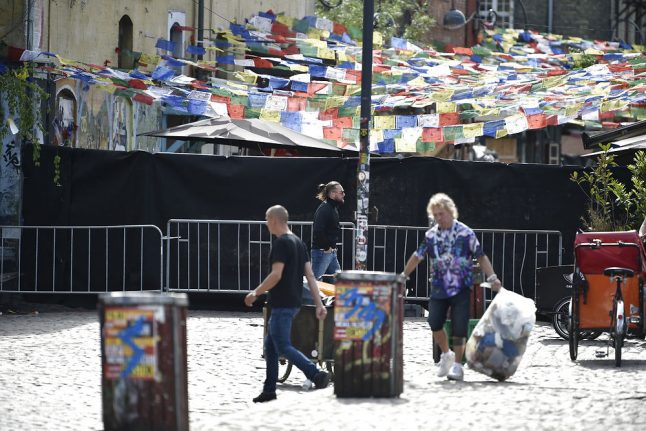 All entrances to the area were closed off with a two-metre high black fence, Ritzau reports.

A woman told a reporter from the news agency that Pusher Street was “closed for today”.

A nearby sign ready that “Pusher Street will be closed for the next couple of days. We will reopen a more pleasant street”. Sale of cannabis is to be discussed by residents in the alternative enclave, addressing differences of opinion as to who is permitted to sell the substance, according to Ritzau’s report.

But no official explanation for the closing off of the area was given on Tuesday morning.

Stalls on Pusher Street commonly sell cannabis and related products and are regularly raided in police clampdowns in Christiania, an area within Copenhagen originally established by hippie squatters in 1971.

So far in 2018, police have made around 150 arrests and remanded up to 50 people in custody at Copenhagen City Court in relation to cannabis trade, Deputy Chief Superintendent Lars-Ole Karlsen recently told Ritzau.

Christiania residents themselves tore down cannabis stands in September 2016, reportedly due to an internal conflict. That followed an incident in which a policeman was shot at and a passing tourist was injured during a raid. The gunman was shot by police and died from his wounds.

A statement over Tuesday’s closure is expected at a later time, according to newspaper Politiken.