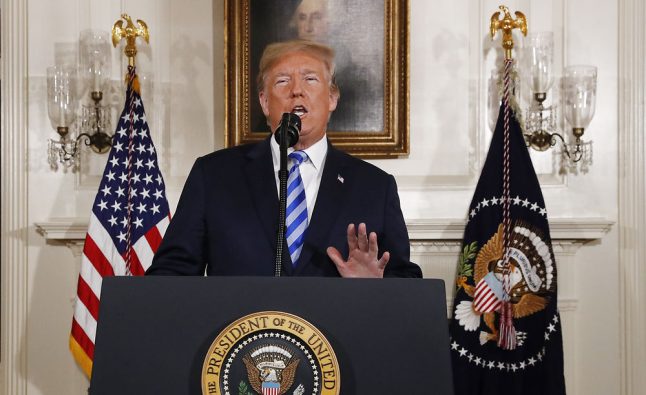 In a statement at the White House on Tuesday, Trump said the US would “exit the Iran deal” agreed with other major powers in 2015, and warned that “any nation that helps Iran in its quest for nuclear weapons could be strongly sanctioned”.

The Joint Comprehensive Plan of Action (JCPOA), also known as the Iran nuclear deal, was agreed in 2015 between Iran, the five permanent members of the United Nations Security Council plus Germany, and the European Union.

DK continues to support the #IranDeal contingent on Iran’s strict compliance. Important for non-proliferation and regional security. Will discuss the matter with colleagues at #EUCO next week. #dkpol

The PM, who has previously sought to cultivate good relations with Washington, did not mention the United States or Trump directly.

Today’s announcement from USA does not change Danish and European support for the agreement. As long as the IAEA can verify Iran’s strict compliance, Denmark and Europe will stand by the nuclear agreement.

“Today’s announcement from the USA does not change the fact that we in Denmark and Europe support the nuclear agreement [JCPOA, ed.],” Samuelsen wrote in a written comment to Ritzau.

“I therefore regret the American decision. The agreement has ensured thorough monitoring inspections of Iran’s civilian nuclear programme and is central for our security,” the foreign minister continued.

Samuelsen added that Denmark was “not naïve” on Iran.

“From a Danish and European point of view, we want to maintain the agreement, provided the IAEA [International Atomic Energy Agency, ed.] verifies Iranian compliance. But we are certainly not naïve when it comes to Iran,” he said.

Since the deal was signed in 2015, the IAEA has consistently confirmed that Iran is complying, while the Trump administration has also repeatedly verified Iran’s compliance.

In announcing the US’ violation of the JCPOA agreement, which he called “gruesome”, Trump also cited Iran’s ongoing ballistic missile programme and involvement in conflicts in Syria and Yemen.

“That’s why the (Danish) government also supports extra pressure being placed on the Iranians in these areas. But that should occur supplementary to the nuclear agreement,” Samuelsen said.

Michael Aastrup Jensen, foreign policy spokesperson with the Liberal party, the senior partner in Denmark’s coalition government, said he was disappointed at the announcement.

“I am very disappointed, but nonetheless unsurprised. We know that Donald Trump promised to break this agreement in his election campaign, and he also has a Republican base that has pushed for it,” Jensen told broadcaster DR.

Jensen also said that Denmark should remain in the agreement.

“The EU, and also Denmark, will do everything we can to remain in the agreement, even though the US is now pulling out of it,” he said.

“It is catastrophic for him to do this. It could have very serious consequences for the entire region. This was a way to stay Iran’s nuclear ambitions while giving more moderate forces wind in their sails. It is now a concern that hardliners [in Iran] will gain power,” Nielsen said.

The former minister said that Iran could again begin to seek nuclear weapons as a consequence of the deal being broken.

“That’s why I am very, very concerned. If Iran resumes nuclear arms development, I fear that Israel or the US will attack Iran, and that will make the Iraq war look like a playground fight, because this would be much worse,” Nielsen said to DR.

The best way for European countries to react would be to remain in the agreement, he added.

“The bottom line of this is trade policies. The EU, Russia and China must maintain that they want to do trade with Iran, so Iran’s economic development can continue. The question is whether the US will put pressure on us,” he said.

No comment has yet been made by the right-wing Danish People’s Party, the second-largest party in parliament and a key government ally. The party’s foreign policy spokesperson Søren Espersen is generally a strong supporter of Israel’s line on major geopolitical issues and spoke critically of the Iran agreement in 2015.

READ ALSO: Danish PM hits out at Trump over steel and aluminium tariffs

EUROPE
How will the EU’s ‘Covid passports’ work for travellers?
Url copied to clipboard!