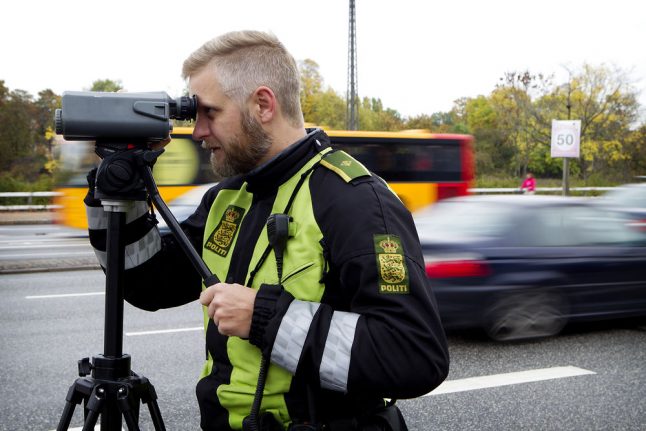 Throughout this week, police will keep an extra close eye on 200 sections of road throughout the country, broadcaster DR reports.

The first day of the initiative brought considerable results, with 1,500 motorists snapped by police mobile speed camera vehicles and a further 100 by laser speed detectors, according to the report.

High speed is a factor in over half of all fatal road traffic accidents, hence the current effort by police targeting various areas, Christian Berthelsen of the National Police Traffic Centre (Rigspolitiets Nationale Færdselscenter) told DR.

“We are running this primarily in areas where there are school roads, places where the most accidents occur causing deaths or injuries, as well as on roads where residents feel unsafe because speeds are too high,” Berthelsen said of the targeted speed traps.

The traffic police officer said the aim of the ramped-up speed recording was not to increase fines, but to reduce speed by forewarning motorists of the extra controls.

“This is firstly about reducing the number of killed and injured in traffic accidents, but it is also about making the population in Denmark feel safe,” said Berthelsen, who contributed to a campaign by the Danish Safe Traffic Board (Rådet for Sikker Trafik) aimed at getting motorists to reduce speed.

As part of this week’s added speed checks, the National Police has named the roads considered the most dangerous in each police district. Drivers can expect some form of speed trap in these areas this week, DR writes.

A number of the targeted roads were selected based on concerns of residents rather than accident statistics, Berthelsen told the broadcaster.

“That means we get a look at some new road sections that may be problematic,” he said.

On the Great Belt Bridge linking Zealand and Funen, just under 140 motorists were snapped within two hours on Monday, the traffic police officer confirmed.

Of these, the fastest driver was recorded at a speed of 153 kilometres per hour. The limit on the bridge is 110.

‘Most dangerous roads’ targeted in this week’s speed camera campaign include (listed by police district):