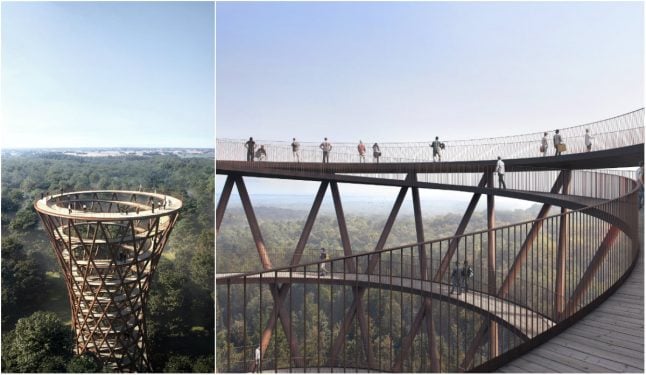 The treetop walk will be 900 metres long and connected to a 45 metre tall observation tower. Photo: EFFEKT Architects for Camp Adventure

Ground was broken on Thursday as construction began on the remarkable structure, a 900-metre long treetop walk connected to a 45-metre tall observation tower, built primarily from wood, DR reports.

The spiral design of the construction will give visitors a 360-degree view over the southern Zealand woodland.

Despite its considerable stature, the tower will not have an adverse effect on the forest aesthetics, according to Camp Adventure’s business developer Kasper Larsen.

“We have worked a lot on the design and have chosen colours that harmonise well with nature. So I think it will be a really complimentary addition,” Larsen told DR.

Minister for business Brian Mikkelsen was present as ground was broken for the commencement of construction on Thursday.

“I’m a jubilant man today. This will be a huge attraction for Zealand. Families are going to come here in droves,” Mikkelsen said to DR.

Camp Adventure currently has 18,000 visitors annually, according to DR’s report, a figure that the attraction’s management expects to shoot up by 100,000 as a result of the new tower.

Carsten Rasmussen, mayor of the municipality in nearby Næstved, expressed his delight at the potential for local tourism.

“This is going be of huge significance for the entire area. People from all over the world will come to see and experience the tower. We can see that nature tourism with walking and cycling routes is a hit right now, so there is no doubt that many thousands will come,” Rasmussen told DR.

Increased tourist traffic to the tower would benefit the local economy as a whole, the mayor added.