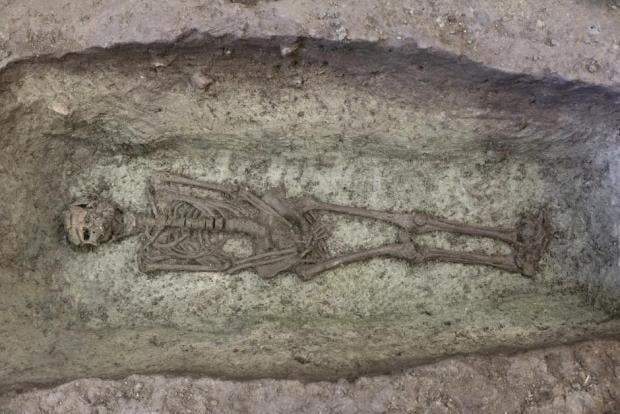 In February, archaeologists excavated 20 skeletons of women, men, and children, who had lived in Copenhagen, 1,000 years ago. They have since found 10 more.

The skeletons were discovered underneath a bus stop in the Town Hall Square (Rådhuspladsen) in the city centre, meaning that this now bustling part of the city was once a grave yard for some of Copenhagen’s earliest known residents.

The excavations are ongoing and archaeologists have now uncovered a stone wall, thought to be the foundations of a church, ScienceNordic reports.

“If it is a church then it supports the idea that Copenhagen was an established city at the start of the Middle Ages,” said Lars Ewald Jensen, head of archaeology at the Museum of Copenhagen, Denmark, speaking to ScienceNordic.

“You can have a grave yard without an established city, because you need more elements in place before you can call it a city. But conversely, you cannot have a city without a church,” Jensen saod.

Copenhagen was gifted to Bishop Absalon by the Danish king Valdemar in the 12th century.

He is famous for establishing Absalon’s Castle, which today is the site of the Danish Parliament.

But the castle was built 100 years after the skeletons were buried in the Town Hall Square.

So, if the new stone wall turns out to be a church, then Absalon’s gift looks substantially more impressive, and certainly not the small fishing village that the history books describe.

“It’s not so unexpected to, again, find a previously unknown church yard from this time in Denmark. What’s surprising here is that for 20 years, we thought that Copenhagen was a small village in the early medieval period. This has since been shaken up and this discovery helps to underline that we’re dealing with a bigger city,” says Jakob Kieffer-Olsen, archaeologist from the National Museum of Denmark, who is not involved in the excavation.

Archaeologists are confident that the Town Hall Square was a church yard between the Viking Age and the Middle Ages, given that the skeletons are laid in a row, at the same level, side by side.

So the question is: How big was this church yard? And was actually there a church nearby? This is what the archaeologists will now try to find out.

“We hope that we’ve discovered the foundations of a church building. In this case, it would be older or perhaps was around at the same time as St Clement Church (Copenhagen), which was excavated in 2008. And we could potentially have discovered the oldest church in Copenhagen,” said Stine Damsbo Winther, archaeologist at the Museum of Copenhagen.

However, archaeologists have a couple of other ideas as to what the stones could be. Possibilities include a boundary wall of the church yard, separating it from the rest of the city, although this this is unlikely as skeletons were discovered on either side of the wall.

If the stones are from the foundations of a church, then it is most likely the oldest church in Copenhagen. Whatever the stones are, they cast new light on the history of the city, Jensen said.

Further excavation and DNA analysis of the skeletons should reveal some answers, the archaeologist added.