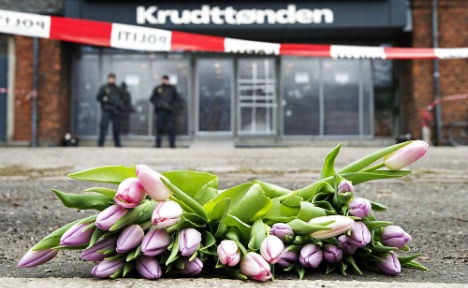 Flowers left outside the Krudttønden this February to commemorate the three-year anniversary of the attack. Photo: Søren Bidstrup/Scanpix
The director Ole Christian Madsen, whose film SuperClásico was shortlisted as the Danish entry for the Best Foreign Language Film for the 2011 Oscars, is soon to start shooting for the film, called ‘Notat’ or ‘Note’.
Ole Christian Madsen told the Ekstra Bladet newspaper that he had started thinking about the film within days, but knew he would have to wait.
“Like everyone else, I was shocked that such an attack could hit Copenhagen,” he said. “I realized that when the time was ripe, a film about the tragedy could contribute to the necessary conversation about it.”
The attack began at 3pm, when Omar Abdel Hamid El-Hussein, from Copenhagen’s troubled Mjølnerparken housing estate, attacked the Krudttønden cultural centre, where the controversial Swedish artist Lars Vilks was giving a talk.
Vilks in 2007 angered Muslims around the world by depicting the Prophet Mohammed as a roundabout dog.
When Finn Nørgaard, a Danish filmmaker, tried to stop El-Hussein, he shot him dead at point blank range.
After the attack, the suspect escaped, reappearing to carry out a second shooting at Copenhagen’s main synagogue at close to 1am in the morning, fatally wounding Dan Uzan, a 37-year-old Jewish community member who was working there as a watchman.
The film takes place over 48 hours and follows the lives of El-Hussein, his two victims and the policeman who shot him after tracking him down some four hours after the synagogue attack.
He rejected the charge that it was still too early to turn the tragedy into fiction.
“Three years is a long time today,” he said. “Time is ripe for the film.”
The victims' families have been involved in the planning for the film from the beginning.
It is being produced by Creative Alliance, the production company owned by Madsen, and three other directors Lone Scherfig, Dagur Kári and Per Fly, and is backed by the  Danish Film Institute.
Madsen is one of Denmark's most high-profile directors (Photo: Thomas Lekfeldt / STF/Scanpix).