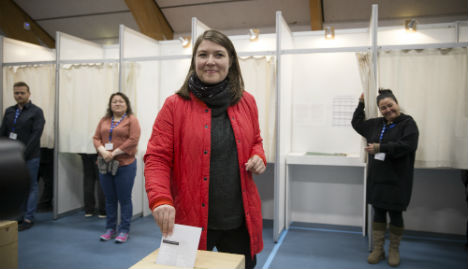 Sara Olsvig, leader of the Inuit Ataqatigiit casts her vote on Tuesday. Photo: Christian Klindt Sølbeck/Ritzau Scanpix
The Siumut party claimed a narrow victory with 27.2 percent of the votes in Tuesday's election ahead of its main rival the left-green Inuit Ataqatigiit party which won 25.5 percent.
Greenland, which is rich in natural resources, gained autonomy from Denmark in 1979 and was granted self-rule in 2009, although Copenhagen retains control of foreign and defence affairs. Both the two main parties favour independence.
But Denmark provides some 3.6 billion kroner (483 million euros, $591million) in subsidies each year, equivalent to 60 percent of the budget and which would be cut if Greenland opted for full independence.
Both Siumut and the Inuit Ataqatigiit saw a significant drop in support compared to the previous election.  They were challenged by the centrist Demokraatit which won 19.5 percent of the vote and has a more moderate take on independence.
Siumut leader Kim Kielsen, a former policeman who has been in power since December 2014, is expected to stay in charge of the government.
“All parties in (the parliament) will be invited to negotiations,” Kielsen was quoted as saying by the local newspaper Sermitsiaq.
“There are many possible combinations (for a government) Rasmus Leander Nielsen, a political scientist at the University of Greenland, told the Danish  Ritzau news agency.
The giant ice-covered island between the North Atlantic and Arctic oceans is home to just 55,000 people.
Fishing, which accounts for 90 percent of Greenland's exports, is benefiting from climate change as rising temperatures bring new species to fish to its waters but that is likely to change over time.
While Greenland may have a wealth of untapped natural resources that could help finance its independence, “it suffers from a lack of infrastructure and a qualified labour shortage,” said Mikaa Mered, an Arctic expert and economics and geopolitics professor at France's School of International Relations.