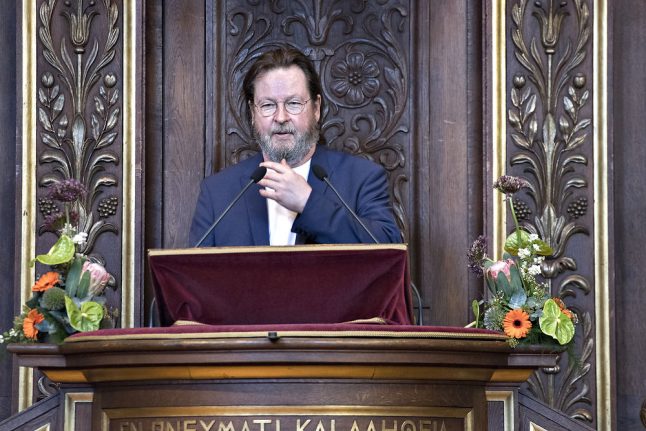 Festival president Pierre Lescure decided to “welcome back” the Danish director, though his film will not be eligible for awards, according to a festival press release.

His film “The House That Jack Built” will screen outside the official competition.

His musical production “Dancer in the Dark” in 2000 won the Palme d'Or, the highest award at the festival and one of the most prestigious prizes in the French film industry.

But Icelandic singer Björk has since alleged that von Trier sexually harassed her during her performance. Von Trier has denied the claims.

This year, five of the nine jury members who award the Palme d'Or are female amid a global movement for women's rights sparked by allegations of sexual misconduct by Hollywood producer Harvey Weinstein.

The majority-female jury, led by Cate Blanchett, Kristen Stewart and Lea Seydoux, was unveiled on Wednesday as talks were under way to allow Von Trier back into the competition.

Von Trier's new film “The House That Jack Built,” which stars Matt Dillon and Uma Thurman, follows the life of a serial killer.

The directors ban from Cannes was due to comments he made during a press conference for his 2011 film “Melancholia,” which starred American actress Kirsten Dunst.

“I really wanted to be a Jew and then I found out that I was really a Nazi,” he said when asked about his German heritage.

“I'm just saying that I think I understand the man. He's not what you would call a good guy, but, yeah, I understand much about him, and I sympathise with him a little bit.”

Later that day, von Trier issued a statement of apology, insisting he was neither anti-Semitic nor a Nazi.

Many cinema professionals, especially in France, felt the Danish director had gone too far and backed the festival board's decision to exclude von Trier.

This year's festival runs from May 8th to 19th at the French Riviera resort.

Von Trier had a second cause for celebration on Thursday as he received the University of Copenhagen's million-kroner (134,000 euros) Sonning Prize, Denmark's biggest cultural award.

“As a filmmaker, Lars von Trier has managed to give different genres his very own interpretation. In that sense, he is a ground-breaking and avantgarde artist who positions himself confidently and self-consciously in a place far removed from the ever more commercialised mainstream films,” chair of the University of Copenhagen's Academy Council Milena Bonifacini said in a press statement.

“I am very proud, something I rarely am, because this prize is not just awarded for a film, but for a life and a way of spending it, a life's work,” von Trier said in his acceptance speech at the University of Copenhagen.

He also commented on the Cannes controversy in the speech, Ritzau reports.

“To the disappointment of some, I have never been a Nazi,” he said.

“The unfortunate outcome of the press conference ended up costing me several years' anxiety. The whole story has taught me to tread more carefully,” the director added.