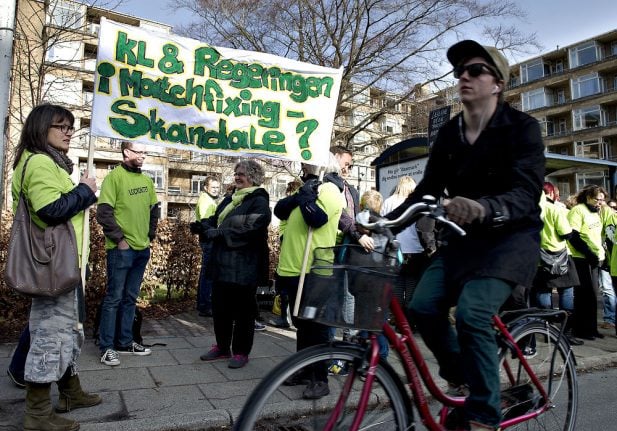 'Denmark takes pride in the work-life balance that the Danish welfare model provides.'

Anyone familiar with studies that regularly credit Denmark as one of the happiest countries in the world will likely have seen this statement before in some form.

Similarly, in 2011, Denmark was named best country for work-life balance, according to a study conducted by the Organization for Economic Co-operation.

During the last month, disputes over labour conditions have delayed a collective agreement between municipal, regional and state employers and trade unions. Should the negotiations ultimately fail, a public sector lockout will result. The most recent memory of major labour conflict in Denmark comes from five years ago.

For almost four consecutive weeks in April 2013, public schools were shut down due to a teachers’ lockout, after the Danish Union of Teachers (Danmarks Lærerforening) and Local Government Denmark (Kommunernes Landsforening, KL) failed to reach a collective agreement on teachers’ working hours.

The Danish labour model, often referred to as flexicurity, is a framework for employment and labour in Denmark, built on negotiations and ongoing dialogue to provide adaptable labour policies and employment conditions. Hence, when employees or employers are dissatisfied, they can negotiate a solution.

But what happens when both sides cannot agree on a solution? The conflict can evolve into a strike or a lockout.

According to DL, 44,000 of its members were locked out in April 2013, losing almost a month's worth of salary – unions have a pool of funds they can pay to members during industrial action, which varies between organisations.

The primary area of conflict for teachers was their working hours and working schedules, and the remit to determine schedules.

The teachers’ union refused to sign a collective bargaining agreement that gave school principles, rather than the teachers themselves, more responsibility for deciding teachers’ work schedules.

When the two sides were unable to reach an agreement, publicly-employed teachers and after-school instructors were locked out nationwide.

Eventually, the government intervened to end the lockout by passing a bill that regulated working conditions for teachers.

In a way, the consequences of the 2013 conflict played a role in the escalation of a potential lockout this year, explains Christian Bøtcher Jacobsen, associate professor at the Department of Political Science at Aarhus University.

“(So) the teachers have been working under conditions that they did not agree on,” he said.

Current negotiations encompass three matters, according to Jacobsen: how much pay should increase for the public sector, keeping or removing a paid lunch break and for the teachers, going back to the negotiations system instead of nationally regulated working conditions. Demonstrators at Forligsinstitutionen in Copenhagen, where talks between state employees and unions are ongoing, on April 11th 2018. Photo: Mads Claus Rasmussen/Ritzau Scanpix

READ ALSO: Thousands of operations could be delayed by Danish labour dispute

The public support is more apparent this year, Jacobsen said, explaining that the employees’ position is much stronger now than it was in 2013.

“I expect that at least those who are not so much in agreement would be tempted to end the conflict and then bail out from the cooperation,” Jacobsen said, “but so far they maintained cooperation, and as much as they do they are so much stronger than they were in 2013.”

The influence of a potential lockout on people’s everyday lives “will be much more significant this time,” Munkholm said.

“Because if your kids do not go to school, you can manage, nobody dies, business can happen as usual, you can find a way to have your kids looked after or you can bring them to work, it is manageable, because it is ‘just the kids’. But it is not manageable if it’s the entire public sector,” the law expert said.

Some essential services, such as issue of passports or controlling the temperature in museums, will be excluded in case of a lockout, according to Munkholm.

A potential lockout could have both short term political consequences like lower GDP rates, as well as long term ones such as general mistrust.

Four years after the 2013 lockout, former business minister Annette Vilhelmsen claimed in a 2017 book titled Søren og Mette i benlås that the government orchestrated the conflict to pass the regulation in parliament.

Chairman of the Danish Teachers’ Union, Anders Bondo Christensen said that there was a campaign “to undermine the trustworthiness of teachers”, adding that the lockout, and the claims that it was orchestrated by the government, damaged the relationship between the union and the government, according to Ritzau.

Christensen had also claimed that throughout the conflict that “the result was written beforehand”.

The failure of negotiations, followed by claims that the government meant them to fail, resulted in lower levels of trust in the government. And trust is an important variable in the Danish model.

“There are higher levels of mistrust than what we’ve seen in a long time and that is also because of what happened in the conflict in 2013,” Jacobsen said.

A survey conducted in 2014 showed that the level of trust by Danes in particular public institutions has declined. Among these institutions was the Ministry of Employment.

There has not been confirmation of the claims that the government orchestrated the 2013 lockout. Even if it was proved, there would be no legal remedy.

Rather, the punishment would be political, Munkholm said, noting that partners in the Social Democrat-led government that was in power in 2013 would simply lose votes if they were proven to have transgressed over the issue. On the other hand, Jacobsen said it was conceivable that the government may have been tempted to end the long-standing showdown between the teachers and KL – the origins of which can be traced back to 2008 — by “orchestrating” the 2013 lockout.

“It is a temptation but it is a dangerous temptation because it risks breaking down the [Danish] agreement model,” he said.

Trust is the main reason why Denmark is wealthy, political scientist Gert Tinggaard Svendsen, author of “Trust, Social Capital and the Scandinavian Welfare State – Explaining the Flight of the Bumblebee”, said in an interview conducted by the Department of Political Science at Aarhus University.

“In a historical perspective, the good work-life balance conditions have been reached through the Danish ‘model of agreements’,” Jacobsen explained.

“Since the 1960s, there has been a stable workforce who were happy with these agreements, but what you see now is that [the] state is interested in downsizing the government and this puts pressure on these agreements.”

A good model that motivates the employee and gives them the opportunity of having a good life is under pressure from a state that wants to be more efficient, putting the model at risk, according to Jacobsen.

“If this system of agreements is to be maintained in the long run then the state must refrain from the temptations of making regulations and orchestrating conflict and that is something the unions are definitely worried about,” he said.