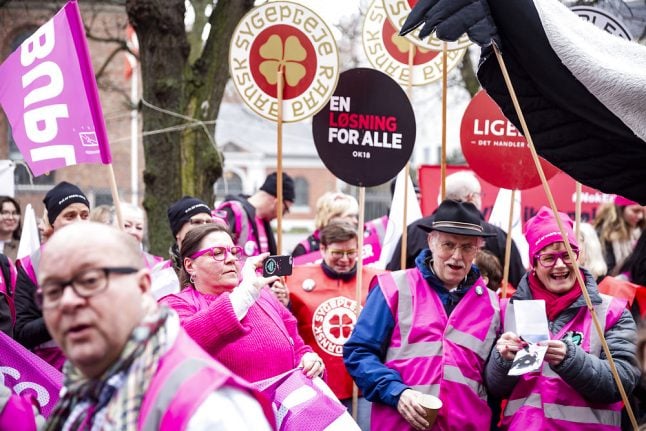 Michael Ziegler, the lead negotiator for municipal employers, said that some progress had been made in the negotiations, which began at 10am on Sunday.

But there remains a possibility that no agreement will be reached between the two sides, resulting in a wide-reaching labour conflict.

“I still view the risk of a large-scale conflict as being very high given that we are now one day closer to the absolute deadline,” Ziegler told Ritzau.

“Now that I have added things up, we have not moved a huge amount overall, even though there has been some positive development,” he added.

At the end of last month, FI delayed industrial action by two weeks to give the parties more time to find common ground. If agreement is not reached, strikes could begin on April 22nd, with a subsequent lockout not before April 28th.

A deal on new terms for public sector workers in Denmark must be reached in order to avoid industrial action in the form of a strike and retaliatory 'lockout', which would have a severe effect on public services in the country.

The deal (overenskomst in Danish) affects people employed by the Danish state, municipalities and regional authorities, with a potential labour conflict affecting public services including healthcare, transport, education and the prison service.

Anders Bondo Christensen of the Danish Union of Teachers, lead negotiator for municipal employees, shared the caution expressed by Ziegler, but added there were “a couple of chances left”.

“We still have a couple of chances before the deadline, although it does not look good that we have not gained more from these long hours,” he said.

Christensen was unable to give further details on the obstacles that stood in the way of agreement being reached due to an embargo on making details of the talks public.

“Everyone knows what the general problems are. We will not have a degradation of our pay and working conditions,” he said.

“We are seeing an attack on the things we are entitled to: customary [public] holidays, paid lunch breaks, rights for seniors and so on,” the lead negotiator continued.

Representatives from regional authorities – responsible for the management of large parts of the healthcare sector – are scheduled to meet for negotiations from 10am Monday, with state negotiations to follow at 5pm.

Negotiators from all sides – state, municipal and regional – have been summoned for joint talks on Tuesday at 2pm, Ziegler and Christensen both confirmed.

SAS
SAS strike: What can be expected from fresh talks Monday?