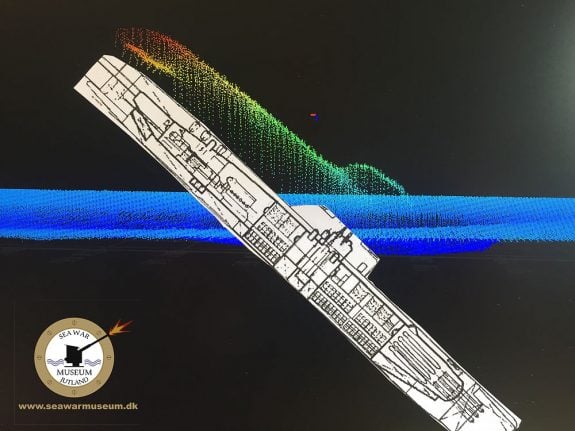 The remains of the submarine, which was at the cutting edge of the marine technology of its time, was found as part of Sea War Museum Jutland’s work to find and map wreckage in the North Sea.

The German submarine, the U-3523, was sunk by a British B24 Liberator bomber airplane on May 6th, 1945 – the day after Allied forces liberated Denmark from occupation by Nazi Germany.

“This was a very special U-boat. It was the most modern submarine the Germans built during the [Second World] war. It was highly modern and well ahead of its time,” Sea War Museum Jutland director Gert Normann Andersen told Ritzau.

“Only two of the 118 that were ordered actually entered service,” Andersen added.

Only one preserved example of a submarine of this type exists, and is displayed at the German Maritime Museum at Bremerhaven, the base for a large part of the German submarine fleet during the Second World War.

Sea War Museum Jutland said it found the U-3523 wreckage nine nautical miles away from where it was previously thought to have sunk.

“This [submarine] was being used as a training ship off Wilhelmshaven. But on May 5th, when the war ended, someone decided to flee.

“Why they were fleeing, and where they were going, no-one knows. So it’s exciting in a way,” Andersen said.

The U-3523 disappearance has been connected with rumours from the end of the Second World War that leading Nazis had fled to South America with fortunes consisting of gold and precious works of art.

Sea War Museum Jutland says it has no plans to raise the sunken U-boat, which is sitting at a depth of 123 metres.