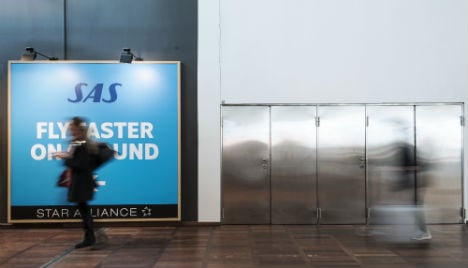 An SAS poster in an airport. Photo: SAS

Public sector workers in Germany including ground crew and airport firefighters are striking on Tuesday between 5am and 5pm local time, hitting airports like Frankfurt – Germany's largest – and Munich.

It is to those two airports that SAS has been forced to stop its flights, and the websites of Stockholm Arlanda, Gothenburg Landvetter, Copenhagen Kastrup and Oslo Gardermoen airports for example show SAS Tuesday departures to the German cities as cancelled. A total of 26 of the airlines flights are impacted.

German giant Lufthansa meanwhile will cancel more than 800 of 1,600 scheduled flights – including 58 long-haul trips – over the strikes.

People travelling from Scandinavia to France have also been advised to double check the situation over their flights after Air France added to the cancellations due to local strikes.

The French airline said it expects to fulfil 75 percent of departures, but two flights from Stockholm Arlanda to Paris on Tuesday have been cancelled. Those leaving from Gothenburg's Landvetter will operate as planned.