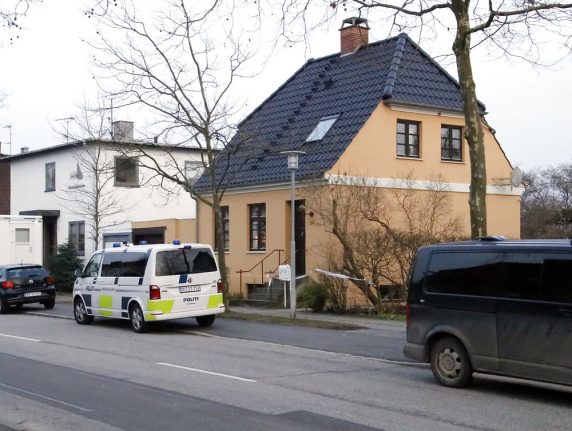 Police at the scene in Glostrup on April 9th. Photo: Mathias Øgendal/Ritzau Scanpix

The body was recovered by police on Monday evening.

Examination of the body, which was described as “mummified”, showed that it belonged to an elderly man, West Copenhagen Police duty officer Brian Holm told Ritzau.

“As things stand with the tests we have conducted, there is no initial suggestion this is anything to do with a crime,” Holm said.

Holm declined to confirm further details as to the dead man’s identity, saying the case fell under the jurisdiction of a separate police district.

“He therefore sent a picture to us. We immediately assessed it to be something we should look at,” he added.

The dead man was found in an area between a parking lot and a house. The corpse is reported to have remained undiscovered for some time prior to Monday. It was discovered underneath a hedge, from where the foot protruded, Ritzau writes.

Police sealed off the area at around 9pm, with forensic teams and police dogs present.

Holm declined to comment on how long the body had been under the hedge.

He confirmed the definition of “mummified”, the word used to describe the body.

“It means [the body] has been there for long enough that the skin has dried out to the extent that parts of the skull are exposed,” he said.

READ ALSO: Man injured after series of shootings near Copenhagen