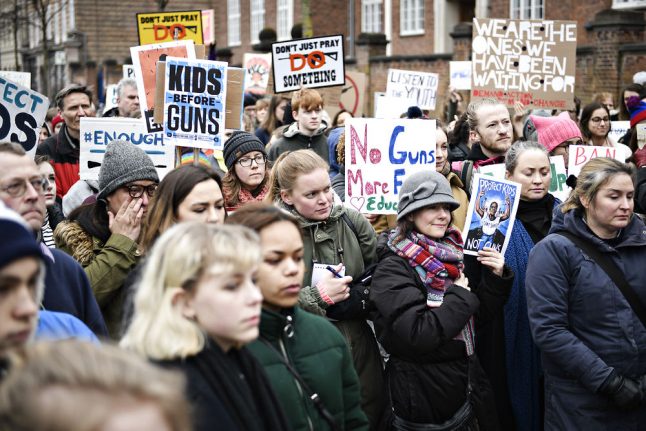 The event, with speeches by US residents in Denmark, teachers and school students, was held in solidarity with the national March For Our Lives event scheduled to take place in Washington, D.C. later on Saturday.

The movement in the United States is led by students of the Marjory Stoneman Douglas High School, in Parkland, Florida, which suffered a gun attack that killed 17 pupils and staff on February 14th.

Like the US demonstration, speakers at the rally in Copenhagen called for tighter gun control and an end to violence and mass shootings at schools.

Held outside the American Embassy in Copenhagen’s Østerbro district, up to 500 people turned out in biting March cold to attend the event.

David S. Miller, spokesperson with Democrats Abroad Denmark and one of the organisers of the demonstration, told The Local there was demand for a rally in distant Denmark in support of the Washington, D.C. action.

“There are demonstrations going on around the world, there are a lot of American students here, [international] students that are going back to their colleges, and they’ve had lockdowns, and they’ve had shooting incidents at their colleges. But Danish citizens and the Danish students here, they feel that these are their fellow students, and it doesn’t matter – if you go into any school, you should feel safe,” Miller said.

The Denmark-based American also said that the event represented an appeal to both major political parties in the United States.

“There are Democrats that don’t believe in strong gun legislation. People are trying to get elected and doing what they do, but for us, this is just a question of morality and ethics and common sense.

“If you look outside of the United States, at any other industrialised country, they have, like in Denmark, just common sense gun laws, they don’t allow semi-automatic military style weapons, you have background checks, you make it difficult for people to have handguns,” he said.

Dr. Julie Shackleford, a teacher at the International People’s School in Helsingør around 40 kilometres north of Copenhagen, attended the rally with several of her students. Lauren Sloan (L) and Julie Shackleford were amongst the American citizens at the Copenhagen rally. Photo: Michael Barrett

Shackleford, who is originally from Wisconsin, told The Local she grew up in a gun-owning home and that she supported the appeal for more gun control.

“For me, it’s a very important issue. I come from a family of hunters, where guns have always been a part of my life, I was taught from a young age to use guns safely. My dad was an NRA member for many, many years. Actually, Sandy Hook [school shooting in 2012, ed.] was a dealbreaker in our family. Up until that point, my dad was a card-carrying NRA member. He turned in his membership after Sandy Hook. And to see that in someone I never thought I would was really inspiring,” she said.

“The fact that this has happened again, and this movement that’s happening right now, I think personally is the first time I’ve really felt that something can happen. It doesn’t seem hopeless. It’s important to be part of that,” the teacher said.

Shackleford cited solidarity in numbers as an important factor in demonstrating outside of the United States.

Lauren Sloan, an 18-year-old student at the Helsingør international school, said she felt a personal need to take part in the event.

“It’s very important for me to be out here because of what [speakers] are talking about, like lockdowns, we experience lockdowns all the time. My university in my hometown experienced a shooting. My mom works [at the university], students had come from out of state to live there, and you shouldn’t have to go off to college or go off to high school and die for it,” Sloan told The Local. Alyssa Postman Putzel, a teacher based in New York City who is currently in Denmark on vacation, was one of the speakers at Saturday’s demonstration.

Putzel said she found out about the Copenhagen event after realising she would be abroad while the March For Our Lives rallies were taking place in the United States.

“I am hoping that our politicians will finally start to listen to the American people. The majority of Americans, including gun owners, want common sense gun laws…. at this point, thoughts and prayers are not enough,” she said.

“Americans based in other countries can still vote. They can help us vote out the politicians that are refusing to make change,” she added.