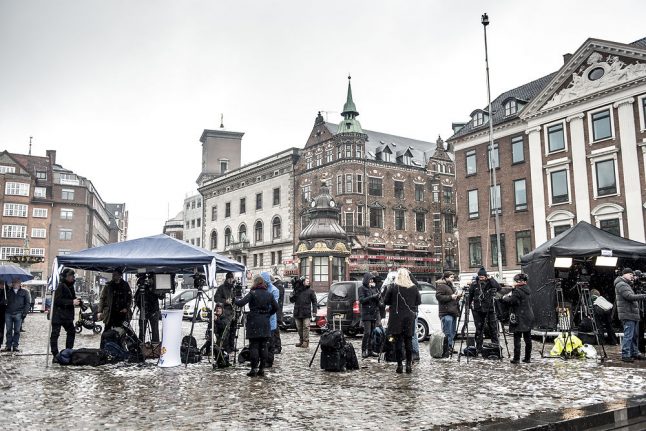 Madsen, 47, said at the opening of his trial on March 8th that Wall, a 30-year-old freelancer, died when the air pressure suddenly dropped and toxic fumes filled the submarine.

He has admitted to dismembering Wall's body and throwing it overboard but denies murdering her aboard the sub where she went to interview him on August 10th, 2017.

The amateur engineer told Copenhagen District Court on the trial’s opening day that the air pressure suddenly dropped inside the vessel where Wall was located while he was up on deck.

An autopsy was unable to determine the cause of death, nor has a motive been established.

But prosecutor Jakob Buch-Jepsen alleged he killed her as part of a sexual fantasy. He said evidence showed Madsen bound Wall around the head, arms and legs before beating her and stabbing her repeatedly in her genital area.

Prosecutors say he then killed her — probably by strangling or slitting her throat — and cut her up with a saw, stuffing her torso, head, arms and legs in separate bags weighed down with metal objects, and dumping them in Køge Bay off Copenhagen.

“I and the defence lawyer will interrogate him all day”, Buch-Jepsen told AFP ahead of Wednesday's hearing, which is scheduled to start at 9:30am.

Thirty-five experts and witnesses are also expected to speak in the Copenhagen district court to evaluate the credibility of Madsen's accident scenario and help understand the psychology of the self-taught engineer.

Madsen has admitted he had lied to investigators and changed his account of what actually happened to Wall several times.

“I wanted to spare her family and the world the details … about what actually happened when she died,” he said on the first day of the trial earlier this month.

The 14 stab wounds on Wall's genitals provide a key insight into Madsen's seemingly contradictory statements surrounding the cause of her death.

“It's important in connection with the sentence,” Henrik Stevnsborg, professor of law at University of Copenhagen, told AFP.

Investigators never found Wall's or Madsen's phones, but were able to recreate some of the messages on them.

On the morning of August 10th, Madsen “googled 'beheaded girl a(r)gony' which leads to a video of an unidentified young woman who is slowly having her throat cut,” Buch-Jepsen said.

The prosecution has said it will seek a life sentence, which in Denmark averages around 16 years, or safe custody (forvaring in Danish), a legal alternative which would keep him behind bars with no time limit as long as he would be deemed dangerous.