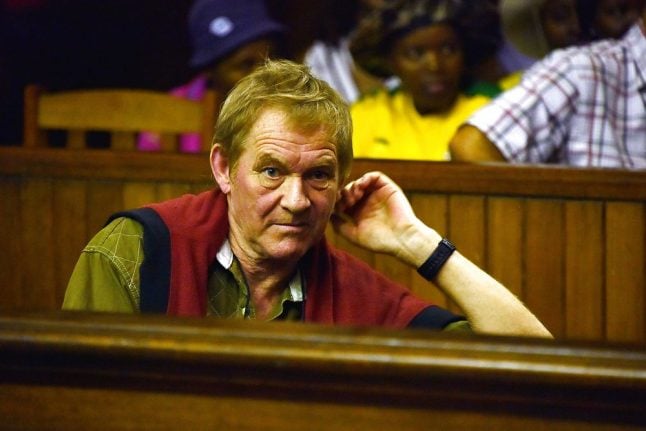 Peter Frederiksen looks on as he appears in the Bloemfontein High court on March 13th, 2018. Photo: AFP/CHARL DEVENISH/Ritzau Scanpix

Peter Frederiksen, 65, was found guilty of 36 offences in the Free State High Court on November 6th, including production of child pornography.

On Thursday, a judge told him he would be removed “permanently” from society.

He received the life sentences for the rape of the child and the murder of his wife, plus other prison terms totalling more than 40 years.

Judge Johann Daffue said that such a serious custodial sentence “must not be imposed lightly”, ruling that the murder of his wife “was pre-meditated and planned”.

“You were the general and you orchestrated the murder,” Daffue added.

The sentencing hearing was attended by many women and children, whom Daffue described as “vulnerable members of our society”.

“They, in particular, must be protected against person like you,” he said. “You must be removed permanently from society”.

Frederiksen had pleaded not guilty to all charges.

Twenty initial charges — later dropped — related to his alleged removal of clitorises which he reportedly kept in a freezer.

Those charges were discontinued as the court found that the law did not specify what penalties should apply for such alleged actions.

Frederiksen's wife, 28-year-old Anna Matseliso Molise, was due to be the key prosecution witness but was shot dead in October 2015 outside her house in Maseru, in neighbouring Lesotho.

South Africa has legislation prohibiting female genital mutilation, although it is not a common practice in the country.

Following the sentencing, Frederiksen apologised to the family of his late wife, his family in Denmark as well as to South Africans.