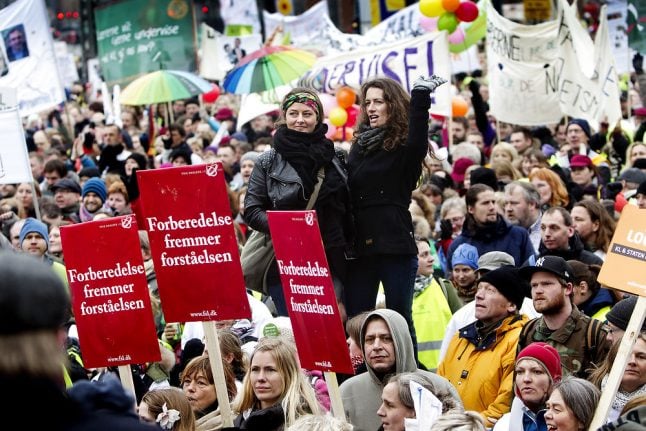 Teachers demonstrate in Copenhagen during a previous lockout in 2013. Photo: Bax Lindhardt/Ritzau Scanpix

The contract (overenskomst in Danish) affects people employed by the Danish state, regional authorities and in municipalities.

Negotiations between those authorities and trade unions have hit several obstacles in recent days. Should a solution not be found, strike or 'lockout' – a temporary denial of employment by the public sector authorities as a response to the dispute – is a possible outcome.

Municipal, regional and state employees are at risk of being caught in the middle of a historic labour conflict after negotiations over new salary and employment terms broke down.

The two sides are set to meet attempt to settle their differences through Denmark's Conciliatory Board (Forligsinstitutionen), but unions representing the public sector workers have advised up to 80,000 members may strike from April 4th, Ritzau reports.

Employers have responded to that by saying they are prepared to implement a lockout of 440,000 staff, a number that could see Denmark grind to a halt, though essential services, such as life-preserving medical services, will be exempted.

The lockout is currently advised to take place from April 10th, although the Conciliatory Board has limited options to delay it.

According to Danish employment law, planned holiday or days off in lieu cannot be taken after an industrial conflict has officially begun. Vacations already begun before the start of the conflict are not affected.

That means that public sector employees who have holiday planned in April or May could be forced to cancel vacation plans unless a resolution to the issue is reached.

Travel insurance does not necessarily cover losses caused by the industrial dispute.

“We have concerned customers that call us to ask how their cancellation policies cover them in this instance,” CEO Pia Holm Steffensen of the Alm. Brand insurance provider told Ritzau.

“The situation is such that the agreement we have entered into with our customers does not provide cover in the case of [an industrial] conflict, whether it's a strike or a lockout. That's standard in the sector,” Steffensen said.

But another travel insurance company, LB Forsikring, said it had chosen to see the situation as extraordinary and will therefore allow polices to cover trips affected by the potential industrial action.

“We have paid close attention to this situation, which could affect many of our members, who are typically teachers, daycarers, nurses and others within the health sector,” LB Forsikring director of communications Christophe Kirkegaard told Ritzau.