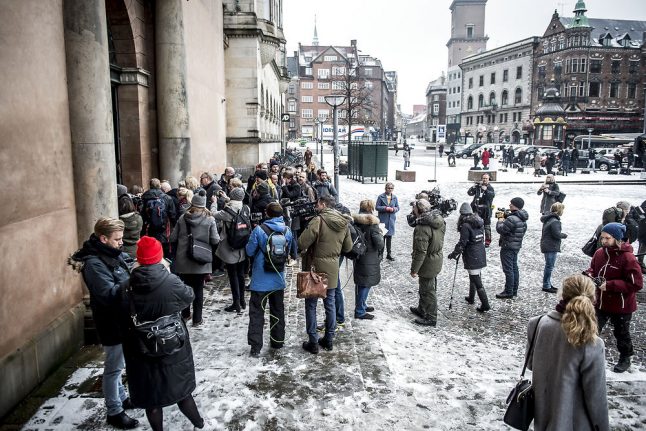 Queues of reporters and other media professionals formed outside Copenhagen City Court, where the trial, scheduled to take 12 days, is taking place.

The 47-year-old did not address the court but his lawyer Betina Hald Engmark said that he denied the murder charge and maintained his position that Wall died accidentally on board his submarine, AFP reports.

He has admitted dismembering her body and dumping it at sea and breaching maritime regulations, Engmark told TV2 earlier on Thursday.

Prosecutors have said that they believe the murder of Wall was premeditated as Madsen brought a saw, knife, plastic strips, and metal pieces on board, all of which they say were used to torture and dismember her and dispose of her remains.

Due to the length of sentence called for by the police prosecution, a jury was initially assigned to the case. But in accordance with Madsen's wishes to have as few individuals judging the case as possible, that has been reduced to a single judge and two lay judges.

Jepsen has previously said he will call for a life sentence, which in Denmark averages around 16 years.

Madsen's pleas to the charges were then given to the court.

The court also heard on Thursday morning that the last contact from Kim Wall was in the form of text messages sent to her boyfriend shortly before contact was lost with Madsen's UC3 Nautilus submarine on August 10th.

A minute later, she wrote: “He brought coffee and cookies tho.”

The last registered activity on the 30-year-old journalist's mobile phone was a few seconds of internet activity at 8.29pm, Ritzau writes.

“That is the last sign of life we have from her,” Jepsen said according to the report.

Wall had agreed to the trip on the submarine as part of her work on a feature on Madsen for American magazine Wired.