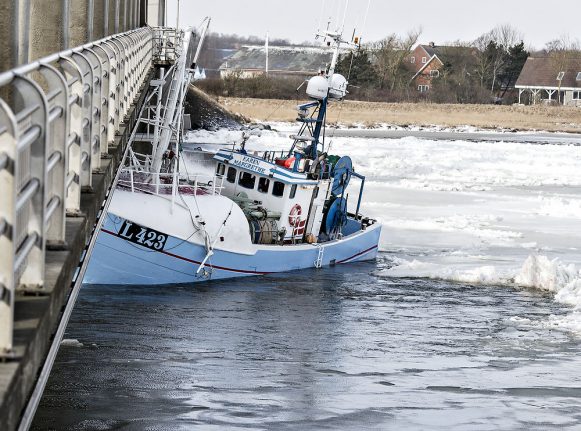 The Defence Command Center (Forsvarets Operationscenter) was informed of the stricken boat near the Aggersund Bridge, around 40km west of Aalborg, at around 9am on Wednesday.

Immobilised by the ice, the boat was reported to be in danger of colliding with the bridge – and this eventuality occurred later on Wednesday.

No serious damage to the boat, besides a broken mast, was caused by the collision. No injuries are reported.

“It is moving very slowly. It is now up against the Aggersund Bridge, and we are waiting to see how it moves,” Steffen Lund of the Defence Command Center said.

Three people were evacuated from the boat prior to the collision with the bridge.

“Our assessment was that the crew's lives could be in danger. So we despatched a rescue helicopter,” duty officer Daniel Ammitsbøl of the rescue service said earlier on Wednesday.

The boat is expected to be recovered during Wednesday afternoon.

READ ALSO: Øresund Bridge closes in both directions after accident