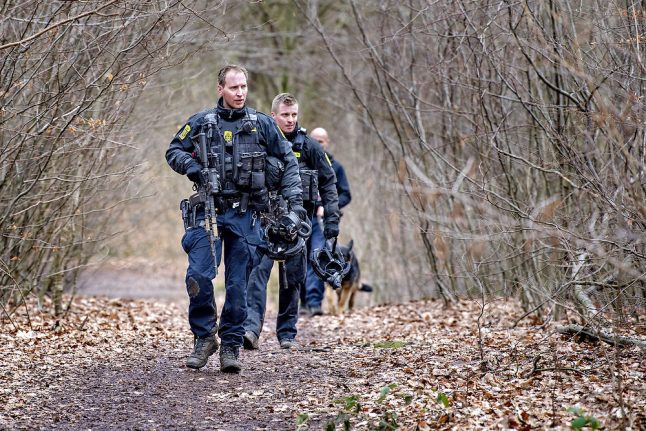 Police searched for the man, here at Bidstrup Hegn, for two days before arresting him at a strip club on Monday. Photo: Bax Lindhardt/Scanpix Denmark

The man is suspected of committing assault with an axe in Birkerød near Copenhagen on Saturday and a bank robbery in Ringsted on Monday.

He also refused to answer when his defence counsel asked how he would plead police charges, and as such is considered to have pleaded not guilty, defence lawyer Peter La Cour confirmed to Ritzau.

At Tuesday's hearing, he was given preliminary detention until March 20th due to concerns he could attempt to disrupt investigation of the case against him if he were allowed to go free.

A number of details were not released by the court due to the ongoing nature of the investigation, which is at an early stage.

The man was arrested on Monday evening at Club 34, a strip bar in Copenhagen's Vesterbro district, following a two-day police search.

He is accused of an unprovoked attack on a 19-year-old couple using an axe at a petrol station in Birkerød. He is suspected of attempted murder.

A woman sustained a fractured skull in the attack, while her boyfriend suffered injuries to his back and hand, the court heard Tuesday.

They were able to fight off the attacker and escape.

On Monday, the suspect is reported to have robbed a branch of Danske Bank in the town of Ringsted, where he used a knife to threaten staff and stole just under 30,000 kroner (4,000 euros). He was therefore also charged with robbery.

Two armed policeman sat behind the suspect, who police consider to be dangerous, at the court hearing.

He wore Adidas shorts and a brown woollen jumper during the hearing, Ritzau reports.

He is also reported to have offended previously, having been sentenced for robbery and attempted robbery in 2015.