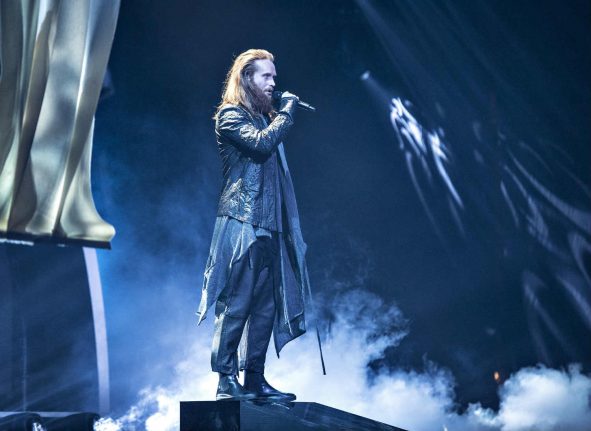 Experts on the centuries-old Nordic practice say they are not surprised by the popularity of series such as the MGM Television series Vikings, and The Last Kingdom on Netflix, as well as HBO's Game of Thrones, which draws some of its inspiration from the Icelandic sagas.

Denmark's Eurovision entry song Higher Ground, which won through to the contest in Lisbon after coming first in the Danish heat on Saturday, is reported to be inspired by the Icelandic sagas of Magnus Erlendsson, the 12th century Earl of Orkney.

Singer Jonas Flodager Rasmussen also looks the part for the Viking theme, with his bushy red beard and long, wild hair not far off the classic image of the raiders who reigned over – and terrorised – the Scandinavian region and beyond from the 8th-11th centuries.

Archaeologist Jeanette Varberg of the National Museum of Denmark said in an interview with broadcaster DR that Rasmussen's song fits well with the times.

“He's a good singer, but he also fits in perfectly with the times. When I saw that he'd won [on Saturday], I thought that the interest in Vikings is now peaking,” Varberg said to DR.

Rasmussen's Eurovision raid on Lisbon on behalf of Denmark is in itself evocative of Viking times, Varberg said.

“Our ancestors have already been over and occupied Lisbon. They plundered the city and burned it down – just as we usually did on raids,” said the archaeologist, who is currently working on a book about the Viking raid on Lisbon in 844 CE, when the city was part of the Islamic Emirate of Cordoba.

Despite the violent nature of Viking history, Varberg said the “strong television series culture” which currently draws on the historical Scandinavian peoples gave a “relatively realistic insight into Viking times”.

“[The various television series] recreate the past on screen and through their characters. You do not need to read books to learn about history, it has now become entertainment,” she said to DR.

The archaeologist also pointed to the influence of Scandinavians of centuries past in modern fashion.

“Young men are growing big beards, people are getting tattoos with Viking symbols, and books are being published that show how to plait hair in a Norse pattern,” she said.

“There's something fascinating about these pirates, who had a brotherhood and preferred to die on the battlefield than at home in their beds. There's something recklessly adventurous about it all,” she added.